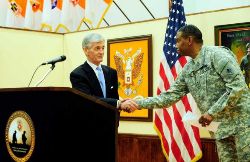 Posted at 14:11h in Augusta Updates, News by Augusta Tomorrow

In his first visit to Fort Gordon, Secretary of the Army John McHugh said Monday that local expansion efforts could total $240 million over the next five years as the post becomes home to one of the most sophisticated cyber operations in American history.

Speaking during an afternoon news conference, McHugh said the Army plans to spend $170 million on new construction and $70 million on renovations at Fort Gordon by the time the Army Cyber Command and Cyber Center of Excellence complete their arrivals in 2019.

Maj. Gen. LaWarren Patterson confirmed that discussions have begun to either build a 179,000-square-foot facility or renovate the National Security Agencys complex at Fort Gordon for the Army Cyber Command, but McHugh said it remains to be seen how construction funds will be distributed.

He said what is certain is that Fort Gordon will play a crucial role in defending the U.S. from emerging Internet and computer-based threats, and that it would be a pretty busy place in 10 years.

In my mind, cyber, as important as it is, will only become more critical to national security in the future, he said. We see this as an emerging challenge, and therefore the capabilities of defending and developing our cyber network as important and likely to grow.

During his visit, McHugh said he met with soldiers from Fort Gordon units, observed training at the Signal Center of Excellence and discussed with Pattersons staff planned growth to ensure their plans, including those concerning the Army Cyber Command, are realistic.

By 2019, the command, along with the Cyber Center of Excellence and growth to Army, Air Force and Navy intelligence units, is projected to add 2,600 military, 900 civilian and 200 contractor jobs to the posts work force.

The Cyber Center of Excellence will boost the posts student population by about 500 service members annually, figures show.

The command team has a very solid plan by which to bring these missions to Fort Gordon and provide the necessary training and facilities to go forward and work in partnership with the local community to build an even brighter future for the area, he said.
With the Army decreasing troop levels by 80,000 soldiers after 12 years of war, McHugh said what surprised him most Monday was that fewer Fort Gordon soldiers were worried about job security than at other installations worldwide.

He said local soldiers were more concerned about growth and expansion.

Thats a good thing, he said. It allows them to be mission-focused.

That attitude, paired with a post that has strong community support, helped Fort Gordon win the Armys vote to bring its Cyber Command south. McHugh described the decision as one of the most intense discussions he has had during his time in office.

He said what finally earned Fort Gordon the nod was its ability to join forces with the NSA, a partnership that is expected to save the Army Cyber Command 150 personnel positions and cut military construction costs by nearly 25 percent.

When it came to the final decision, it was one of the easiest I have ever had to make, said McHugh, who signed the directive to bring the operations to the area. It was about as close to a no-brainer as you can get.

McHugh said his staff is working as hard as it can to avoid defense furloughs in the future, but he would not go so far as to say that Fort Gordon is immune to days of unpaid leave like the six that local civilians endured last year.
Ive learned that you never say never, he said.