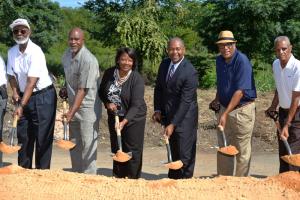 Posted at 07:25h in News, Uncategorized by Augusta Tomorrow

At a groundbreaking Monday, the mayor bragged on the city’s effort – a partnership with Georgia Power and contractor Inman Solar that was set in motion last year by the Augusta Commission.

The first location, an unused former Augusta Utilities compost site near the Mayor’s Fishing Hole on Lock and Dam Road, will have an educational component involving nearby Phinizy Swamp Nature Center, Davis said.

“These are the types of projects that can work, they do work and they make good business sense to the city of Augusta. I couldn’t be more proud of that today to say we did that together,” he said.

The other two sites are at the Charles B. Webster Detention Center on Phinizy Road and at the N. Max Hicks Tobacco Road Water Treatment Plant.

The three one-megawatt sites are dwarfed by a Georgia Power effort at Fort Gordon. There, a 200-acre site was announced to return 30 megawatts to the state’s electric grid by the end of the year.

Georgia Power hopes to double that number by the end of the decade, she said.

A fourth solar project – installation of solar panels atop the former main library that is being renovated to serve as offices for the Augusta Public Defender – has a $45,666 bid award going for committee approval today.

The commission approved spending $25,000 each for the five-acre sites to join Geor­gia Power’s Advanced Solar Initiative Dis­tributed Generation program, then leased the sites to Inman Solar, which recently reimbursed the city $585,000 in upfront costs, said Environmental Services Director Mark Johnson. Inman will pay Augusta $20,000 a year per site for the next 20 years and sell the energy back to Georgia Power.

The city hired Atlantic Coast Consulting and Allied Energy Services to assist with the project and identify Inman, which will develop, own and operate the three sites.

No photovoltaic panels were in place Monday, but all three sites are expected to be operational Dec. 1.

Inman principal Dan Fossitt said he expected the jail project to be “unique” among the more than 100 solar systems his company has designed. Augusta’s sites will have 3,125 6-by-3-foot panels standing two per beam 30 inches in the air, high enough that new low-growing vegetation can be cut beneath them, he said.

The panels will be tilted 25 degrees facing due south in rows running east and west, Fossitt said. The gated system will be operated remotely and create a low hum, he said.

Marion Williams, one of five commissioners to attend the ceremony, said he’d been skeptical about the project at first. It passed 6-1 with several members leaving immediately beforehand and Commissioner Sammie Sias opposed. Williams said he now supported the city doing something with unused property rather than letting it stand idle and considered it an example of “outside the box” thinking.