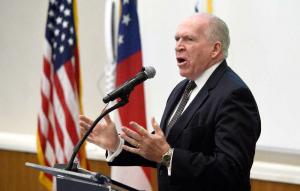 Posted at 13:35h in News, Uncategorized by Augusta Tomorrow

CIA Director John Bren­nan said Augusta is doing it right when it comes to supporting cybersecurity.

“I think this community represents the marriage of the private and public sector,” Brennan told media members Thursday after his keynote address on Day 2 of the Cyber Georgia conference at Augusta University.

“We have Fort Gordon … and Augusta University, which is really determined to bring together the representatives from the different sectors of society and recognize that cybersecurity affects us all. It’s something that we really need to all work on,” he said.

The summit, which brings together government, academic and industry experts to exchange ideas, is in its third year at Augusta University. This year’s summit was co-hosted by the Georgia Cham­ber of Commerce. Offi­cials expect the program to continue to grow and gain more national recognition.

“We have been told to expect what’s been called a cyber tsunami,” AU President Brooks Keel said, adding that “Augusta has got to be ready.”

Former U.S. Sen. Saxby Chambliss, who also spoke at the event, said he used to speak about cybersecurity and get little response, but now it’s a topic no one can ignore.

“The No. 1 issue in every boardroom of American companies today is cybersecurity,” Chambliss said. “It’s that important and it’s reached that high a profile.”

He said the nation is seeing everything from 15-year-old hackers operating out of their parents’ basements to sophisticated criminals running programs to shut down entire computer programs.

With the cyber command center coming to Fort Gordon, that means cybersecurity discussions will now center on this city.

During his speech, Brenn­an discussed the “unprecedented range of threats” the country faces today in the digital domain. He said that in fiscal year 2014, federal agencies were the target of more than 640,000 cyber-related incidents.

Attacks are not only coming from everywhere, but attackers can also cover their tracks easily.

Brennan said that forums such as the one in Augusta are examples of ways professionals can work together for solutions and recognize the problems the country faces.

After his speech, Brennan took questions from Chambliss, who served as a host for the morning session, and from the audience. The questions ranged from the serious, such as threats from other countries and terrorist groups, to whether he preferred the TV show Mr. Robot or Homeland. The latter question drew laughs from the audience, but Brennan said he hadn’t seen either show.

During the first day of the conference, the National Security Agency signed a deal with Augusta University allowing soldiers at the NSA’s Fort Gordon complex to obtain degrees at the university. NSA Deputy Director Richard Ledgett also spoke to attendees.