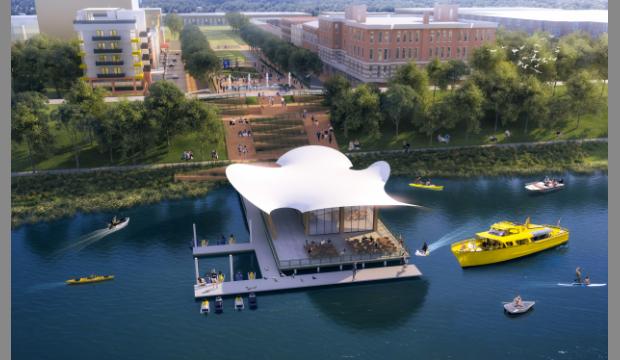 Posted at 13:08h in News, Uncategorized by Augusta Tomorrow

Tourism officials on Thursday unveiled a long-range plan that calls for linking the Augusta Common to a riverfront center , increasing public artwork in the city center and allowing visitors to tour downtown in rented golf cars.

Those proposals, and a half-dozen others, were pitched to community leaders as part of a strategy to make the city more attractive to visitors during the Augusta Convention & Visitors Bureau’s annual “State of Tourism” event.

“This is our roadmap – our blueprint – for the next 10 years or more,” CVB President Barry White said in an interview before the plan was presented during a luncheon at the Legends Club.

Called Augusta’s “Destination Blueprint,” the plan had only been seen by small groups of city officials and business leaders.

“A lot of our ideas are not new,” White said. “We didn’t need to reinvent the wheel. We looked at every master plan we could find and identified every tourism-related project in them.”

With the help of Conventions, Sports & Leisure International, a Minneapolis-based tourism firm, the CVB blueprint identified the following priorities:

• Augusta Common extension: The plan calls for the downtown park to be expanded north across Reynolds Street to the levee, where a gradual incline would form a plaza at the top that connects to a floating “riverfront destination center” where visitors could rent canoes or bikes, take boat rides or simply enjoy drinks and snacks in the heart of downtown.

“The idea is that it’s got to be something on the water that will let visitors engage with the river,” White said. “North Augusta is building its destination point with Project Jackson. Right now, our only destinations would be downriver at the (city) Marina or the Boathouse.”

Most of the property the expanded Common would occupy is vacant and owned by Morris Communications Co., parent company of The Augusta Chronicle. The CVB’s artist renderings depict a tree-lined promenade extending across the property lined with various commercial and residential buildings.

• Defined downtown districts: The plan would delineate sectors based on how they have naturally developed over the years. The “Hospitality District,” for example, would encircle the Augusta Marriott at the Convention Center and its adjoining properties, while the “Arts & Culture District” would encompass sections of lower Broad Street where the Augusta Museum of History and historic theaters such as the Miller, Imperial and Modjeska are clustered.

Several blocks of upper Broad Street, which has most of downtown’s bars, restaurants and art galleries, would be the “Dining & Entertainment District” while the “Medical District” would denote the health care cluster formed by University Hospital, the Charlie Norwood VA Medical Center and the Augusta University Medical Center at the corner of Walton Way and 15th Street.

“If you think about great destinations and what they’re delivering, we’re a little behind,” he said.

The plan suggests creating a pedestrian connection between the Springfield Village Park and the Augusta University Riverfront Campus to promote the properties’ potential for public art gardens.

• Golf car transportation: To leverage Augusta’s standing as the world’s golf car capital – about 85 percent of production is concentrated here – street-legal, GPS-equipped electric cars would be made available for visitors to rent for downtown “micro tours.”

The golf cars for self-guided tours would be housed near the CVB’s downtown visitor center, which is expected to open at 1010 Broad St. in 12-14 months. Other golf vehicles could be operated as a shuttle service by a third party vendor, such as Nashville, Tenn.-based Joyride, which operates in that city as well as in Knoxville, Tenn., Tuscaloosa, Ala., and Panama City Beach, Fla.

“The target is the ‘last mile – distances that are too far to walk, but not far enough for a taxi or Uber,” White said.

White said the company plans to launch service in Birmingham, Ala., and Athens, Ga., this year.

• Family entertainment development: White pointed to the Columbus, Ga.’s Chattahoochee River Park, which offers urban whitewater rafting and ziplines, as an example of an “adventure park” that could be developed along Augusta Riverwalk.

• Urban trail completion: The plan says the city should concentrate on finishing the final trail sections to connect to the network that extends up the Augusta Canal to Columbia County and across the Savannah River to North Augusta.

“You’ve got to realize the first year or two you’re not going to make money,” White said. “But hopefully after that, it catches on and becomes self sustaining.”

• Addition of “rectangular” sports fields: Compared to peer cities, metro Augusta is deficient in sports fields that can be used for soccer, lacrosse and Quidditch, a new co-ed contact sport adopted from the Harry Potter series of fantasy books.

Aside from analyzing previous downtown studies, White said the CVB received input from groups such as the Georgia Forward-Young Gamechangers, the city’s recreation and parks department, the Greater Augusta Arts Council and from individual responses to 25,000 surveys to residents, visitors and travel writers.

“It could be the most collaborative effort that I’m aware of,” White said. “We tried to cover all our bases.”