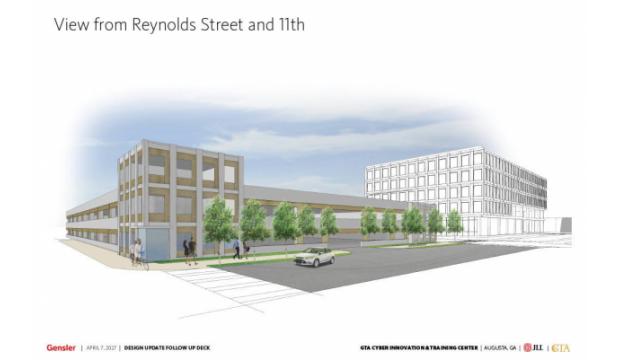 Posted at 09:04h in News, Uncategorized by Augusta Tomorrow

The new $50 million Georgia Cyber Innovation and Training Center will be a combination of many things, a public building that encourages interaction on the lower floors and a secure building on higher floors that offers privacy for agencies and companies that need it, the building’s project manager and state officials said.

That blending will also be reflected on the outside with a mix of brick facade that reflects its downtown location and a sleekness that denotes the cybersecurity role many will play inside.

The international Gensler architecture firm chosen to design the building also comes with an important advantage – the company’s Baltimore office has designed buildings for the intelligence agencies in that area and has a “prototype” that will cut the time needed to design the building nearly in half, officials said.

Gensler’s Atlanta office, one of 45 the company has worldwide, formally signed a contract April 6 and hopes to have construction documents the general contractor can use within 3½ months, where normally at least six months might be needed. The Georgia Technology Authority, which is building the project, is looking to hold a formal groundbreaking in early June, but a date has not yet been set. An official opening date has – July 10, 2018, which creates a timeline that is “a bit aggressive,” said Calvin Rhodes, executive director of the technology authority.

“There’s enough demand for these buildings and the developers move so fast that they developed a prototype approach,” he said. “It’s a version of an office building that works really well for cybersecurity tenants.”

For instance, in a normal commercial office building, the architects try to keep its “core,” where typically the elevators and stairs are located in the center, relatively small to emphasize the exterior spaces with a view, Puckhaber said.

“In this case, because of the cyber ranges and SCIF space, the dark space in the core is really valuable to them,” he said, so it is expanded and utilized. There are specific requirements spelled out for these kinds of buildings to prevent snooping or unauthorized access, such as radio frequency isolation of rooms or spaces.

Rhodes spent a couple of days in Augusta last week meeting with tenants and potential users of the building: first with what he called “our federal three-letter partners” who might use the cyber range at the site, a secure area for cybersecurity training, and other secured areas; the following day with Augusta University and Augusta Technical College and other agencies about what their needs would be in the more public areas of the building, he said. That may result in the lower floors being the public, free-flowing area and higher floors being restricted access, Rhodes said.

“As we go higher up in the building, the building is becoming more secure,” he said. “An entire floor can be secure or classified, a component of a floor or none of the floor. That’s part of the building that gives us lots of flexibility because that design has gone into every floor to meet federal requirements to secure that space.”

For instance, a key card might be required to take the elevator to certain floors, Puckhaber said. Walls in secure areas don’t connect with outside glass, a potential weak spot, and a kind of metal mesh is added to regular drywall to help secure the space, he said. Gensler is also the architect for the new U.S. Army Cyber Command headquarters building being constructed at Fort Gordon and some of the secure areas in the Georgia Cyber building may look similar to areas there, Puckhaber said.

But the architects are also drawing inspiration for the more public areas from the J. Harold Harrison Education Commons building at AU, Rhodes said. In particular, for the ground floor of the Georgia Cyber building, there will be classrooms, conference and meeting, rooms but also a lot of public space and outdoor areas, “creating a place where people can just enjoy being together and learning from each other,” Puckhaber said.

“We like some of the open space of (the Harrison building), that will hopefully foster collaboration between the different groups, which we believe is one of the blessings of this space; is the teams all working together to try to solve unique problems in this space,” Rhodes said.

As far as the outside of the building, “We’re going with something, while it is definitely modern, it has significant nods to the brick architecture of the downtown building,” Puckhaber said. It will be in grids with individual windows and brick inlay, he said, with a denser number of windows and more of the look of a downtown building on the front facing that direction and becoming “glassier” as the building moves toward the Savannah River, Puckhaber said, where the building will connect with an extension of Riverwalk Augusta.

“It’s going to be a beautiful façade,” he said. The 320-seat auditorium will be built as a wing on the side of the building, which frees the architects from having to find space for it in the main building and “it gives us more to play with as architects,” Puckhaber said.

They have also put some thought into the landscaping and the outdoor spaces, he said.

“The choice of the planting materials is going to be very traditional and garden-like, in keeping with a lot of what you see in Augusta,” Puckhaber said. The walkways and benches and other outdoor seating, however, “will be very contemporary, clean lines that are in keeping with this technology-oriented building and also show that this is something new and special,” he said.

Having Gensler bring a prototype building design allowed the technology authority “flexibility to spend some time in other areas to produce a better product, and spend more time with the agencies and potential partners,” Rhodes said. “We’ve had a lot of interest from the private sector already.”

In fact, plans were to initially finish out only 75,000 of the 159,000 square feet of the building, with the other space available to tenants like defense contractors or others in related fields who might want o finish the space themselves. But Rhodes said he may soon have leases for potential tenants to consider, which is ahead of schedule.

A big piece also got underway last week when the Augusta Commission approved moving forward on $12 million for a 500-space parking deck, freeing up significant money that can go into the building. Rhodes said that partnership with the commission and Augusta Mayor Hardie Davis “is just significant in us being able to get this done.”