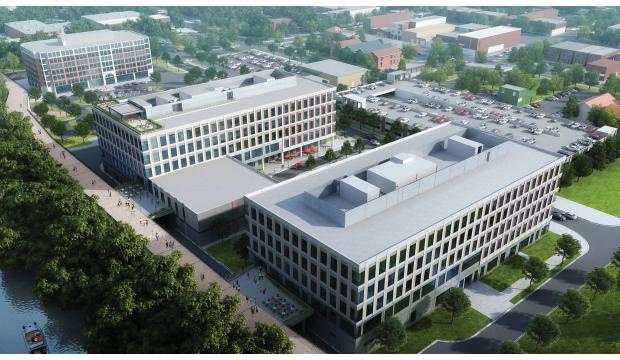 Posted at 08:58h in News by Augusta Tomorrow

Officials will break ground Jan. 3 on the second phase of the state’s cyber training center downtown, which has now doubled in size.
Members of the Georgia Technology Authority’s Board of Directors met in Augusta on Thursday to tour the Hull McKnight Georgia Cyber Innovation and Training Center.

The GTA is overseeing construction and operation of the now-332,000-square-foot center. It describes the center as the nation’s single largest investment in a cybersecurity facility to date.

The first phase is being built now and is slated to open July 10. Construction of the second phase is scheduled to begin mid-January and finish in December , according to Calvin Rhodes. He is the state’s chief information officer and the GTA’s executive director.
Georgia Gov. Nathan Deal on Nov. 27 announced an additional $35 million in funding for the center. That brings its total cost to $95 million.

“The governor’s vision had multiple phases as part of it. We all viewed that phase two would probably be a year or two down the road,” he said. “And it was great when the support for building one continued to grow, and the governor got the leadership in the state to buy in and do this now.”

Both phases are five-story buildings whose exteriors essentially will be mirror images of each other, connected by a 320-seat auditorium.

The center’s second phase primarily will be an incubator hub for technology startups and a training space for state cybersecurity initiatives and workforce development programs.

The education and training center overall will be used to prepare professionals to protect the nation from cybersecurity threats.

A portion of the center will be office space for private-sector companies contracting for the military. The U.S. Army Cyber Command will transfer completely to Augusta’s Fort Gordon by 2020. The fort is the region’s largest employer with its vast communications and cybersecurity training centers.

Firming up tenants for those offices depends on the fort, and Rhodes said the GTA has had “great conversations” with potential occupants.

“We’ve got proposals in front of individuals. As you see Fort Gordon start to award their contracts, those proposals will turn into hard leases,” he said. “Many of those companies need class-A office space. They need to be somewhat in a secure area with access to some rooms that allow for classified briefings. All of that is very important to them.”

The center also will house the Georgia Bureau of Investigation’s cybercrime unit and the Georgia National Guard, among other state organizations.

The center’s parking deck will be the closest building to the campus border on Reynolds Street.

“We’re working very hard to have it open when the building opens,” Rhodes said. “We’ve paused construction to re-engineer a few things so, in the future, we can add more levels onto the parking deck. You will actually see it coming out of the ground sometime in January.”

The current parking deck design has 575 spaces, he said. An additional 600 spaces can be added as demand grows.

Rhodes also said the city of Augusta has been “a tremendous partner on helping us with items like parking.”

The entire project left William D. “Doug” Lewis very impressed. He is the chairman of GTA’s Board of Directors.

“I think this represents a degree of cooperation that I have never seen in my career,” Lewis said. “From the vision of the governor to Calvin’s execution from our side, the contractors, the University System and technical college system – it just represents a degree of working together and a commitment to getting it done on time.”

The center is aligned with Augusta University’s Cyber Institute and AU’s recently launched School of Computer and Cyber Sciences. The center will anchor AU’s Riverfront Campus.