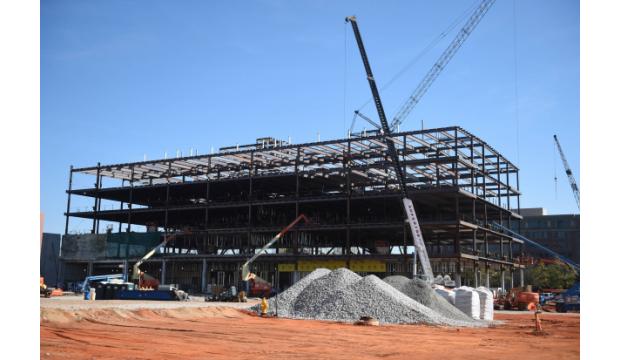 Posted at 14:35h in News by Augusta Tomorrow

Local and state officials Thursday ceremonially “topped out” the steel frame of a $60 million cybersecurity training center scheduled to open next July.

Workers on the Hull McKnight Georgia Cyber Innovation and Training Center actually put the final steel beam in place, on the highest point of the mid-rise building, Nov. 10. But Thursday’s gathering more formally recognized the progress of the facility, including a barbecue lunch to thank the project’s work crews.

For weeks before the topping-out, project partners and the local community were invited to sign the final beam for posterity. The beam features more than 150 signatures. A crane raised an American flag and a Georgia state flag at the building site Thursday, both of which were flown over the State Capitol on Oct. 1, the first day of National Cyber Security Awareness Month.

“With the signing and the placement of this beam, Augusta takes a step forward as the potential cybersecurity capital of the nation and, soon to be, the world,” Augusta Mayor Hardie Davis said. “Our skyline and our community have forever changed by the addition of this state-of-the-art facility.”

Calvin Rhodes, the state’s chief information officer and executive director of the Georgia Technology Authority, said the beam’s signatories represent “only a fraction of the number it’s taken to make this possible today.”

The GTA is overseeing construction and operation of the 167,000-square-foot center. It describes the center as the nation’s single largest investment in a cybersecurity facility to date.

Rhodes said the cyber world is changing so rapidly “it’s probably the slowest it’s ever going to be today. The work that will be done in the center will support a future that we really can’t even envision today.”

The education and training center will prepare professionals to protect the nation from cybersecurity threats. The center is aligned with Augusta University’s Cyber Institute and AU’s recently launched School of Computer and Cyber Sciences. The center will anchor AU’s Riverfront Campus.

The center also will house an incubator for startup cybersecurity companies and the Georgia Bureau of Investigation’s new cybercrime unit.

The center also is partnered with Augusta Technical College. Its president, Terry Elam, said the center will help “give an opportunity for students to, in many cases, have a seamless transition from high school to two-year college to four-year college to graduate school, all in our community. That’s something we look forward to.”

Jones Lang LaSalle is the construction project manager and is providing leasing information for the center. M. Arthur Gensler Jr. and Associates Inc. is the architect. New South Construction is the general contractor. Cranston Engineering Group is handling the engineering work.