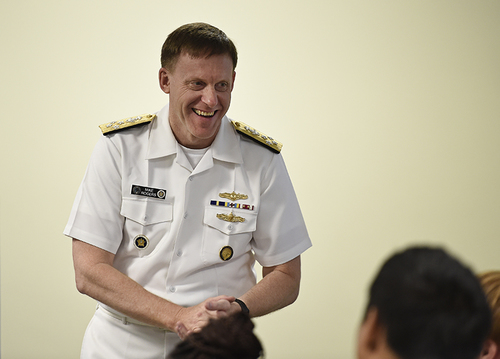 Posted at 12:14h in News, Uncategorized by Augusta Tomorrow

The chief of the National Security Agency and U.S. Cyber Command praised Augusta’s growing cyber sector and its initiative to support a military and civilian defense speciality that’s increasingly important to national security.

“If you look at what is resident in this area, you have a strong educational end. You have a very talented workforce, both civil and on the government side. You’ve got government centers of excellence in cyber, signal and intelligence,” said Adm. Michael Rogers.

Rogers, NSA director and commander of U.S. Cyber Command, was the keynote speaker Thursday at a privately sponsored cyber defense conference at the Augusta Marriott at the Convention Center.

During his second visit to the city in eight months, he addressed about 100 participants from the military, government agencies, commercial companies and defense contractors. Afterward, he visited Georgia Regents University where high school students were completing a week-long summer camp focused on cyber security.

Fort Gordon, the commercial sector and government groups in Augusta are working together to strengthen education, training and job opportunities in cyber security and defense, Rogers said.

“You’ve got a local set of political leaders who are interested in engendering that kind of cooperation,” he said. “That is a very powerful combination, one that I’ll tell you as the guy that travels literally around the world, you don’t always see in a lot of places.”

Rogers said visiting Augusta allows him to talk to the private sector about cyber tactics. The U.S. depends on expertise from commercial cyber companies to enhance its knowledge and practices in a rapidly evolving cyber industry, he said.

The public and private sectors cannot work independently to defend the nation from foreign cyber breaches, he said.

“To make this work, and one of the reasons why I’m down in Augusta today, is in the end this is all about the power of partnerships,” Rogers said.