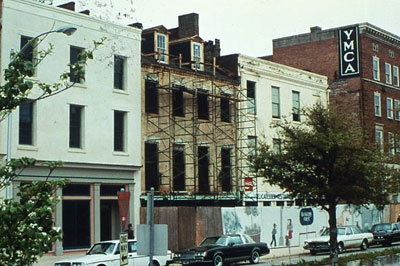 8/6/1984: The City of Augusta executed an agreement with the Department of Natural Resources in the amount of $35,000 for the first phase development of the 1.2 acre Bay Street Esplanade Project (renamed Riverwalk Project) and the golf exhibition.

10/15/1984: Augusta Tomorrow entered into an agreement with the City of Augusta to prepare and administer a Riverwalk feasibility study and plans for a golf exhibition. The $35,000 for this study was granted by the Office of the Governor and channeled to the City through the Department of Natural Resources of the State of Georgia.

11/5/1984-12/31/1984: City of Augusta formally contracted with Augusta Tomorrow, Inc. to assist in implementing the Downtown Development Plan. With this agreement, Augusta Tomorrow, Inc. agreed to: provide staff services (both administrative and clerical) for the Augusta Port Authority, to assist the City in implementing the Downtown Development Plan as prepared by the American City Corporation and assist in the preparation of financial packages and Urban Development Action Grant (UDAG) applications.

11/9/1984: A ceremony for the groundbreaking for Lafayette Center was held. At the groundbreaking federal HUD funding for this project was presented to the Mayor. Augusta Tomorrow board members were promoters, developers and investors in this master plan project. The project was called the Bankers First Project before being renamed Lafayette Center.