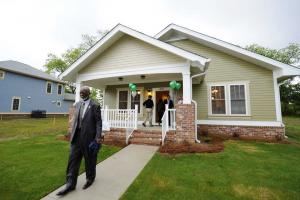 Posted at 12:39h in News, Uncategorized by Augusta Tomorrow

Hope for the historic Laney-Walker and Bethlehem neighborhoods is embodied in two new single-family homes on Twiggs Street, which have manicured lawns and front porches begging for a rocking chair.

Officials who helped build them envision working parents raising families inside. They hope to fill them with homeowners who want to nurture a neighborhood back from blight.

“We are creating livability once again by bringing back families that will allow us to move from community development to economic development,” said Hawthorne Welcher Jr., interim director of the Housing and Community Development Department.

With the unveiling of two newly built homes on Twiggs Street on Wednesday, city leaders and redevelopment partners unveiled Phase I of Twiggs Circle, one of several revitalization projects set in the dilapidated Laney-Walker and Bethlehem neighborhoods.

The two homes completed on Twiggs Street are the first of 21 Housing and Community Development hopes to build along that corridor. One is currently under contract with a buyer, and the other house next door – with two stories, three bedrooms, and two-and-a-half bathrooms – is for sale at $168,500, said Meybohm realtor Kenley Clark.

Along with the 21 homes for sale, Twiggs Circle includes a $4.6 million public housing neighborhood for seniors 55 and older, with eight single-family homes already completed and 16 duplexes to be finished by summer, according to Richard Arfman, the Augusta Housing Authority director of planning and development.

The two-bedroom single-family homes have front porches and a brick finish. The duplexes are designed to look like single-family homes and a park is being carved out in the neighborhood, which is being paid for by the Housing Authority with funds from the 2008 sale of Gilbert Manor.

“This immediately puts people back where abandoned houses, abandoned lots were,” Arfman said. “It brings the neighborhood back.”

Arfman said all eight single-family public housing units will be filled by May, and the duplexes will be filled when they are completed in the summer by seniors already on the Housing Authority’s waiting list.

Augusta Commission member Marion Williams, whose District 9 super district covers the neighborhood, said he believes the Laney-Walker area can return to a thriving, bustling community again. But that goal requires homeowners investing in the new, modern homes and taking part in reviving the culture.

“I hope people will come because when you turn and walk away from a neighborhood it’s going to go downhill,” he said. “But people are coming back.”

Fort Gordon Army Sgt. Tanya Carroll, 31, toured one of the new homes Wednesday and was impressed with the quality of the design, the hardwood floors and granite countertops.

She said she likes the idea of being part of a revitalization, but she is worried about investing $168,500 for a home in a neighorhood still in flux.

Currently, funding is not yet secured for Phase II and III of Twiggs Circle, which would help demolish remaining condemned and dilapidated properties and build homes with stainless steel appliances, bathrooms with ceramic tile flooring, bronze fixtures and a charming exterior.

Meanwhile, Twiggs Street is still surrounded by abandoned homes fire-charred and neglected. The Housing and Community Development Department’s two new homes are bright spots in front of a row of boarded up houses. Some homes have broken windows and wood panels falling from the sides and are generations removed from their thriving years.

Carroll, who is buying her first home, said she can envision great potential with 19 more of the same homes, but is debating taking the chance.

“I’m all for reconstructing areas, I just need to make sure it’s going to go forward and follow through and not just stop,” Carroll said.