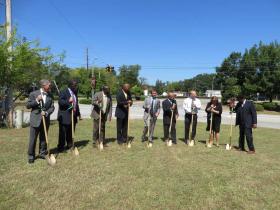 Posted at 07:27h in News, Uncategorized by Augusta Tomorrow

The transformation from blight to renewal began today for another section of the Laney-Walker neighborhood.

The development – called Twiggs Circle – is the fourth of six targeted redevelopment projects that are part of a larger initiative to rebuild the historic Laney-Walker and Bethlehem areas.

One of the first construction projects to begin in Twiggs Circle will be a $4.6 million public housing neighborhood funded by the Augusta Housing Authority. The 16 duplex units and eight single-family homes will be reserved for senior citizens.

Richard Arfman, the planning and development director for the Augusta Housing Authority, said the Laney-Walker area needs housing for elderly, especially after the Gilbert Manor public housing complex was sold to the Medical College of Georgia in 2008 and later demolished.

“When we tore down Gilbert Manor, we pledged we would build back some senior housing in Laney-Walker Bethlehem,” Arfman said. “This is totally 100 percent public housing.”

Construction – funded mostly by the sale of Gilbert Manor – should be complete by June.

Additional homes in Twiggs Circle will be built by Builders of Hope, a nonprofit community development agency based in Raleigh, N.C., that has built more than 600 homes in two years in several distressed neighborhoods in North Carolina, Georgia and Florida.

Builders of Hope plans to break ground on 30 homes by the end of the year on Twiggs Street, said president and CEO Lew Schulman.

The first three houses will begin in the next two weeks in partnership with the Laney-Walker Development Corp.

The first three homes will cost about $475,000 to build, and the selling price will be between $149,000 and $179,000, he said. Builders of Hope is providing financing for about three-quarters of the project.

“We are trying to build extremely high-quality houses because it’s going to increase the property values, thereby making the city’s contribution less and less,” Schulman said.

Road improvements including two roundabouts are also part of the neighborhood revitalization.