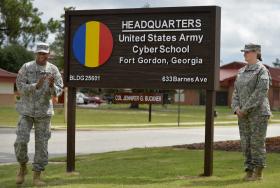 Posted at 12:48h in News, Uncategorized by Augusta Tomorrow

In two ceremonies hailed as historic moments for the Army, Fort Gordon took another step toward implementing the expansion of cyber warfare missions at the military installation.

On Monday, two commandants officially took control of schools for Signal and Cyber training at the Fort Gordon Cyber Center of Excellence, and a refurbished building for the U.S. Army Cyber School headquarters was unveiled.

“We are working diligently to obtain full operationally capability of the Cyber Center of Excellence by October 2015, the goal set by the chief of staff of the Army,” said Maj. Gen. LaWarren Patterson, the commander of the U.S. Army Cyber Center of Excellence and Fort Gordon. “Today’s ceremony is a critical part of that goal. The cyber school will be a world-class institution.”

“All cyber space operators who leave these doors will report to the operational Army ready to stand guard on the digital battlefield of the cyber domain,” Patterson said.

Before unveiling the headquarters, a ceremony was held in Alexander Hall for Buckner and Col. Thomas Pugh, who was installed as commandant and 37th chief of the Signal Corps. Patterson relinquished his command as Chief of Signal.

Patterson said the Signal Corp, which celebrated its 154th anniversary this year, has a rich history while cyber warfare has a short history with an exciting future.

“Cyber space operations are a natural evolution of the (information technology) evolutions of the past several decades. Today, we are writing the first chapter of cyber history as Col. Buckner takes the reins of the first ever Cyber Commandant,” Patterson said.