12-Screen Movie Theater with Restaurant Being Built @ Village at Riverwatch 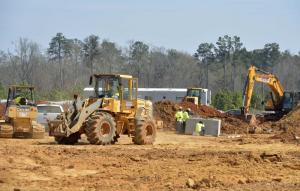 Posted at 14:10h in News, Uncategorized by Augusta Tomorrow

A new movie theater in the works plans to keep date night under one roof.

Set to open by the end of 2015, a 12-screen, 70,000-square-foot theater under construction at the Village at Riverwatch development will include a full-service restaurant and plans to serve beer, liquor and wine to guests paying to see a movie.

Each auditorium will have full-reclining leather chairs, and one theater will feature an 80-foot-wide, 40-feet-high “Georgia Theatre Xtreme screen,” equipped with Dolby 7.1 Surround Sound and 3-D digital technology.

The 4,000-square-foot restaurant inside the theater will offer an American bistro menu and a full-service bar, similar to what one would see at an Applebee’s, said Georgia Theatre Co. President Bo Chambliss, who is currently working with the city to obtain an alcohol license for the establishment.

“There will be some TVs where you can watch a sporting event if there’s one on and you can either sit in the restaurant and have your dinner or alcoholic beverage, or you’ll be able to take it out in the auditoriums,” Chambliss said.

Having recently unveiled similar, but smaller, concepts in Athens, Ga., and Florida, Chambliss said the theaters have generated positive feedback from patrons. He sees the future of movie theaters catering to food and beverage service and providing fewer, but bigger seats.

“People have (a) limited amount of time, especially people who are out with baby sitters at home,” Chambliss said. “When they can combine dinner and a movie, it saves them time and money.”

Chambliss said that if the theater’s restaurant is well received by patrons, the plan is to add in-auditorium dining and install a call button system that would allow moviegoers to place food and drink orders from their seats.

As competition from home theater systems, on-demand services and online streaming platforms increases, more exhibitors are looking for ways to draw patrons back into movie theaters.

“The industry is responding by investing in 3-D infrastructure, upgraded facilities and promotions,” according to information from an IBISWorld industry report.

The U.S. movie theater industry, which generated about $14.9 billion in revenue last year, expects to see modest growth over the next five years, as it combats competition and flat admissions, according to IBISWorld, a global market research firm.

By 2019, industry revenue is expected to rise 7.4 percent to $16 billion, while the number of theaters across the country is projected to drop by about 5.5 percent to 4,419.

“Operators are concentrating their screens in fewer but larger high-end megaplexes, where costs can be spread over higher admissions and concessions sales, according to the report, compiled by IBISWorld Industry Analyst Darryle Ulama. “Luxury theaters are attracting consumers who are willing to pay more for an experience that they cannot replicate in their homes, while other theaters are enhancing amenities and upgrading seats and services.

“Select theaters are providing food and beverage services during screenings and many have invested in alcoholic beverage licenses. Alcoholic beverages garner higher mark-ups and can attract consumers that are willing to spend more across the board.”

Cinema consultant Jack Oberleitner said the first “super-luxury” and “dinner” movie theaters appeared about 12 years ago in Singapore. A decade ago, variations began popping up across the U.S. West coast and then in major cities on the East coast. Only recently have such establishments emerged in medium-sized cities like Augusta, and many still remain in the West, he said.

“The whole thing has proven to be very successful, said Oberleitner, who has more 50 years experience in the movie business and now owns Oberleitner Associates Cinema Consultants. “Whether it can work in smaller markets, let’s say in towns of 100,000 or less, is yet to be seen.”

Oberleitner said movie theaters have a lengthy history of reinventing themselves, dating back to the 1940s and ’50s when TVs were first introduced in mainstream America.

“When I first got into the movie business in 1959 as an usher, people told me that the movie business was pretty much dead and gone,” he said. “It has been a recurrent, cyclical thing practically since the Warner Brothers opened their first movie theater in 1907. It was always considered just a temporary fad.”

Over the decades, theaters have dabbled with 3-D glasses, Smell-O-Vision, which used fans to pump various smells into auditoriums, super-wide screens and massive subwoofers to remain relevant.

Food service is an attractive avenue for theater operators, Oberleitner said, because it yields a much higher profit margin than film showings. On average, first-run movies leave theaters with about 5 percent of what comes in the box office, whereas concession sales provide a 60 to 70 percent profit, he said.

The evolution from popcorn, candy and soda to a full-service dining experience has been a slow progression over the past 20 years or so, Oberleitner said.

Like Chambliss, Oberleitner said guests are now looking for more convenience and ease, leading many theaters to relocate back near malls and other shopping centers. The new theater opening in Village at Riverwatch, off River Watch Parkway and near Interstate 20, will be next to a Costco and Cabela’s and was planned to be constructed adjacent to a fashion outlet mall, which was scrapped last year.

“There are a lot of people that really enjoy one-stop shopping,” Oberleitner said. “If they can have a theater close to shopping and/or dining and/or something to do after the movie, they would rather do that then move from place to place,” he said.

Chambliss said his company will install Outtakes Bar & Grill restaurants in the next couple of theaters that are slated to be built.

“People are building complexes that can offer more to the patrons,” Chambliss said. “More people these days want to enjoy food and an alcoholic beverage when they’re on the night out, so we’re just trying to offer as many options as we can.”

Chambliss said the opening of Augusta theater will not effect those two locations.

The area’s other two theaters, in Augusta Exchange and the Aiken Mall, are operated by the nation’s largest movie theater chain, Regal Entertainment Group.