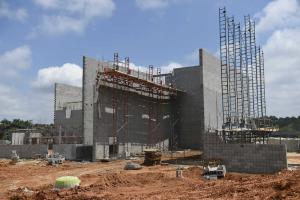 Posted at 11:41h in News, Uncategorized by Augusta Tomorrow

Star Wars: Episode VII – The Force Awakens is set for release Dec. 18. The theater company is trying to get its new 14-screen movieplex on River Watch Parkway open by then, said chairman and CEO Bill Stembler.

Steel and concrete block walls are still being erected on the site near Costco and Cabela’s in west Augusta. Rainy weather has made the construction slow going, Stembler said.

“We’re working around the clock. We had so much bad weather in March and April, it was hard to get going. You can see how muddy it is now,” said Bo Chambliss, the president of the St. Simons Island, Ga.-based company. “We’re trying to make up time right now.”

Chambliss and Stembler were on the site Thursday to inspect the construction. More than 100 workers are building the exterior. The number working there will expand once plumbers and electrical workers arrive.

The new theater will be the first in the company where every seat is a full electric recliner. It is also adopting the concept of dinner and a movie in one location: A 4,000-square-foot restaurant inside the theater will offer an American bistro menu and a full-service bar.

Hiring of the theater’s staff should begin in November.

The theater will not have a box office. Tickets will be purchased online or through a kiosk in the lobby. Chambliss said the company is changing its Web site to allow people to buy tickets online, to be followed by a smartphone app that allows online ticket purchases separate from Fandango.

Chambliss said he expects the app to be ready by the time the new Augusta theater is open.

The big wall is up – the four-story one that will back the 80-foot-wide, 40-foot-high Georgia Theatre Xtreme (GTX) screen, the company’s premium digital competitor to IMAX. It will also use Dolby Atmos, a recently developed “moving audio” technology that Stembler said the executives saw in action at a convention two years ago.

Chambliss said the company has retrofitted three other theaters to have GTX. There are liquor licenses for four theaters, he said, and Augusta will be another to serve beer and wine to moviegoers.

As for the Evans theater, Chambliss said, “we’ve talked about adding a GTX there, but if we do that, it will be a few years. We want to see how this one goes, what the impact is.”

The Evans location might be in line to get a renovated lobby and concession area, he said.