2 Downtown Bridges to Be Restored 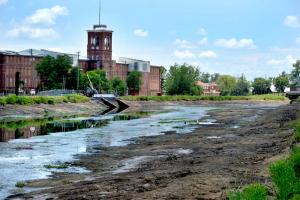 Posted at 12:14h in News, Uncategorized by Augusta Tomorrow

The draining of the Augusta Canal is allowing two downtown bridges to be restored.

Work has already begun on the Archibald W. Butt Memorial Bridge on 15th Street and the Broad Street bridge over the Augusta Canal. Although both are structurally sound, traffic engineers said it will allow for some rehabilitation.

Crews started Monday injecting a waterproofing material into the cracks in the underside of both bridges.

“They drained the canal so the contractors can actually get up under there,” said Anthony Taylor, Augusta construction engineer.

The bridges are two of eight undergoing upgrades in Richmond County with funds from the Georgia Transportation Investment Act, a penny sales tax passed in 2012 to provide infrastructure improvements to the Augusta area. Five of the bridges are downtown. Taylor said all eight bridges are under contract and in various stages of rehab.

The Butt bridge project will be one of the more extensive projects and is budgeted for $2 million. Hameed Malik, assistant director of the Augusta Engineering Department, said the project’s goal is to “bring the historic look back.”

The bridge was dedicated April 15, 1914 to honor Archibald Butt, an Augusta native. Butt, a military man and close adviser to President William Howard Taft, died on the Titanic in 1912. Witnesses said he went down with the ship after giving up his lifeboat seat to women and children.

The rehabilitation project will include replacing the bridge decking, adding bike lanes to both sides of the road and restoring or replacing some of the historical elements including the lighting.

Cranston Engineering Co., which was awarded the contract for the Butt bridge, is working closely with Historic Augusta to make sure the historical look is maintained.

“The bridge itself is going to look new,” Taylor said. “You’ll have new painting, bike lanes and lighting.”

Replacement of the decking will result in some lengthy closures to 15th Street. Traffic engineering have a tentative closure date of Monday.

Closures are expected to last about eight months.

Rehabilitation to the Broad Street bridge will not be nearly as intensive and will not affect travelers as much.

Most of that $1.2 million project, which was contracted to Moreland Altobelli Associates, will consist of repairs and upgrades to the underside of the bridge. It, like the Butt Bridge, will get patchwork and painting underneath.

Officials said a closure will likely be needed later in the project while crews work on the railing, but it will not be as lengthy as the other project.

“We’re really not trying to close both bridges simultaneously because we know it disrupts traffic,” Taylor said.