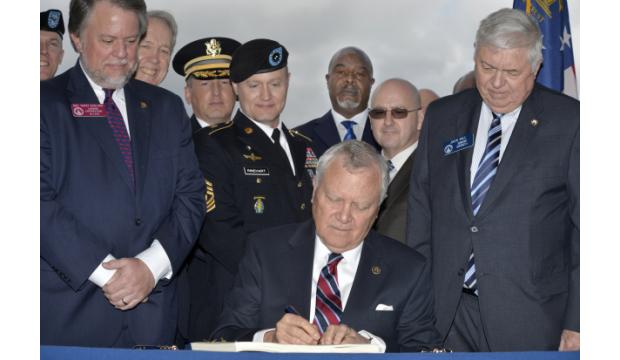 Posted at 14:37h in News, Uncategorized by Augusta Tomorrow

With the stroke of a pen, Georgia Gov. Nathan Deal on Wednesday authorized $50 million for the Georgia Cyber Innovation and Training Center on the banks of the Savannah River and set off a swirl of talk about collaboration that will bring together government, academia, industry and the military, officials said.

Deal signed the amended fiscal year 2017 state budget, which also includes a 20 percent raise for 3,300 state law enforcement personnel as rows of officers from the Georgia State Patrol, the Georgia Department of Natural Resources and and Motor Carrier Compliance Division stood behind him. Since the raise was announced, the number of applicants to the patrol’s trooper school has doubled, the governor said.

“It is having a very positive effect,” Deal said.

The signing took place on Augusta University’s Riverfront Campus, the site of the former Golf and Gardens property, where the center will be built. The University System of Georgia Board of Regents voted this week to turn the nearly 17 acres over to the Georgia Technology Authority, which is building the center, to accelerate planning.

Ground for the cyber center will be broken soon, and Deal said he wants the new center open in 18 months, almost unheard of for a state project. The funding was structured to make that happen as quickly as possible.

“We’re funding the cyber academy with cash, rather than going through the bond process,” he said. “We’re fortunate to have enough revenue to be able to do that. That gives us a jump-start on it.”

The Georgia Technology Authority has far less bureaucracy to go through than other parts of state government to plan and execute the project, AU President Brooks Keel said.

“(It) gives them the ability to short-circuit a lot of that red tape in a very significant way,” he said. “That’s why the GTA was the perfect place for it. They have flexibility that most state agencies don’t have and a lot more flexibility than the University System of Georgia.”

University will run the day-to-day operations of the center through an agreement with the authority, and the two groups already are working to plan and design the center, Keel said.

The project is accelerated to coincide with efforts to build a new headquarters with the Army Cyber Command, the first part of which will open in May 2018, and with investments from the National Security Agency, Deal said.

“They are going to be great collaborators with us. I believe in what our projects are going to do because it benefits them if they have the trained people that are available for their employment as well,” he said.

Because cybersecurity is such an evolving field and the need for trained personnel is so great, no one entity can do it all, said Col. Todd Turner, the garrison commander for Fort Gordon.

“No one right now has all of the resources to develop all of the capabilities that we need in cyberspace,” Turner said. “By having collaboration, what we’re really doing is we’re actually improving our capability in a much more rapid pace than we would have if we do it alone.”

After the site planning is over and construction has begun, the remainder of the site will be returned to the university system so that AU can plan for additional projects that Keel said will be a “digital village” of university programs, private contractors and industries involved in related fields.

Keel said he is already fielding inquiries from companies interested in the incubator space the new facility will have. In the past nine days, seven companies in related fields whose interest in Augusta has been sparked by the new center have contacted the Augusta Economic Development Authority, said Executive Director Walter Sprouse. There is no question that some industry will move to the area before the center is even open, he said.

The city’s downtown businesses will benefit from the center and the people and students it will bring, the governor said.

“It is going to be a great thing for downtown Augusta,” Deal said. The entire state will also benefit by getting well-trained people in an area of need, which justifies the state investment, he added.

“I do not know of any other state that has taken such a bold step, and I think it is an area where Georgia will be recognized as a national leader,” he said.

To provide the educated workforce that new cyberindustries will need, the schools will have to do their part, Deal said.

“The Richmond County School System has some work to do,” he said. “They have too many chronically failing schools. In order to have the pipeline for workers and for students who will be able to take advantage of this, if you want those to be local students, they have to have an underlying good education.”