$50 million Cyber Security Facility to be Built on Augusta Riverfront 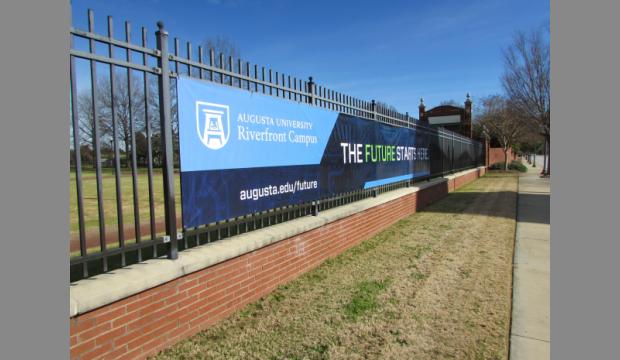 Posted at 10:42h in News, Uncategorized by Augusta Tomorrow

The Georgia Cyber Innovation and Training Center was a highlight Wednesday of Deal’s annual State of the State address and the 150,000-square foot facility is envisioned to be part of a collaborative between government, academic institutions and private industry around cyber security.

“The protection of Georgia’s citizens, businesses and institutions in the digital realm is becoming significantly more necessary as cyber crime continues to grow,” Deal said. “Building on our efforts to keep Georgia safe and maintain its status as the No. 1 state in which to do business, we are taking action to ensure that Georgia leads the way on cyber security.”

The facility is planned for the old Golf and Gardens property along the Savannah River in downtown Augusta, which is now AU’s Riverfront Campus. Technically owned by the University System of Georgia Board of Regents, the portion of the 17 acres needed will be deeded back to the state and AU will develop the rest of the property, Keel said. Once approved, the facility will happen quickly, he said.

“It is going to happen with lightning speed,” Keel said. “The governor has made it very, very clear: he wants us to break ground by the summer. He wants this facility open in roughly 18 months after that. This will also coincide beautifully with the (U.S. Army) Cyber Command that is moving to Fort Gordon and their plans to have their facilities open, too.”

Army Cyber Command will open the first phase of its new buildings in May 2018, with a second phase opening in early 2019. As with current facilities in Maryland, business and industry that support Cyber Command will also move and the area needs to be ready, Keel said.

“I said all along that the cyber tsunami that is going to hit Augusta is not just what is being built out at Fort Gordon but more importantly it is all of the companies and businesses and industry that are going to be moving to this area to support that initiative out there,” he said. “This will help all of those companies out there understand that we are dead serious about this and this is the place they need to come and locate.”

“We’re steps away from the upper end of Broad Street, with all of the explosion of restaurants and really neat bars and things like that,” he said. It will invite private investment in new housing, retail and maybe even additional hotels as AU also develops the rest of that campus, Keel said.

“That’s what we were hoping to be able to do is to not only develop the entire 17 acres over time but use that as the catalyst for huge growth in the whole downtown area,” he said.

AU’c Cyber Institute will move from the Summerville campus to the new facility and that will also be a tremendous boost to that program, Keel said.

“This is going to put a huge spotlight on Augusta and certainly Augusta University in terms of what we are doing with regards to training,” he said. “We will have the absolute, state-of-the-art training facility right there on that Riverfront campus area to help train and educate the workforce for generations to come.”

The center will work closely with the Defense Department as well as the National Security Agency and the Army Cyber Center of Excellence, which also have a big presence at Fort Gordon. The new facility will also house the Georgia Bureau of Investigation’s Cyber Crime Unit, according to documents from the governor’s office.

Deal’s proposal was applauded by Georgia congressional leaders, including Sen. Johnny Isakson, who called it “an invaluable resource to our defense community as well as a boon to our economy.”

To Jay Heslen, an assistant professor of political science at AU and a former officer with the Defense Intelligence Agency, the center will be a major expansion for the Cyber Institute.

“When you talk about the cyber innovation center that’s coming, we’re going to be supporting 85 state agencies with their cyber training and education,” he said. “That alone is a huge mission which will probably double, if not triple, what’s expected of us right now.”

For Matt Tennis, an AU senior majoring in computer science, it is “absolutely huge” for the university but also very necessary for these times.

“The last decade, everyone has seen how far technology has come, and look, there are a lot of great things about that,” he said. “However, security is lacking. We’re in desperate need of people who are willing to become trained professionals.”