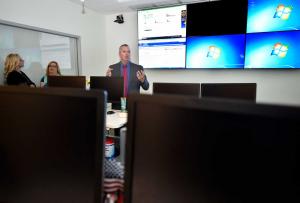 Posted at 11:57h in News, Uncategorized by Augusta Tomorrow

The Critical Incident Response Center – ADP’s fifth in the world and second in the U.S. – will help the payroll and outsourced services firm provide round-the-clock digital security for corporate clients worldwide.

“Our threats are broad and wide, from nation-state terrorism and espionage to normal economic and financial crimes to general cyberattacks,” ADP Chief Security Officer Roland Cloutier said during the grand-opening celebration at the company’s west Augusta campus.

The firm handles payroll for one in six workers in the nation, moves $1.7 trillion yearly and maintains a database of Social Security numbers second only to the Social Security Admin­istration,

“We literally have the aggregate information of 630,000 businesses, who works for them, where their pay goes and very sensitive information,” Cloutier said. “As long as there are computers and money in the world, bad guys are going to be looking for that.”

ADP Vice President Dave Brendza, the general manager of the 1,300-employee Augusta operation, said the Critical Incident Response Center is to corporate security what the National Security Agency operation at Fort Gordon is to national security.

“We look at those attacks coming in, we monitor where they are coming from, and we try to disable the attack,” Brendza said. “We don’t launch offenses, but we stop the attack and then we look at how it happened and then we put up measures to prevent it in the future.”

In addition to having an already substantial local footprint, the company chose to locate the cybersecurity center in Augusta because of its quality-of-life, its hurricane- and blizzard-free weather, and its pool of skilled labor created by NSA and U.S. Army Cyber Com­mand operations at Fort Gordon.

The response center will employ roughly three dozen analysts but could be expanded as the need arises, Cloutier said.

ADP, which stands for Auto­ma­tic Data Processing, established operations in Augusta in 2007 at offices on Stevens Creek Road. It moved into its present 160,000-square-foot complex on Interstate Parkway off Wheeler Road in 2009.

In September, the company announced a $20 million expansion that would add 60,000 square feet of office space and 600 parking stalls to the campus, enabling it to hire additional staffers and move 200 existing employees from leased space in the former Medac office building on Scott Nixon Memorial Drive.

ADP’s Augusta employment will be nearly 1,700 employees when the project is complete in mid-2017.

“We’ve just had robust growth here,” Brendza said, “and it’s all because of the success we’ve had here in trying to cultivate relationships, but more importantly the talent we’ve been able to attract to support our various products and services.”