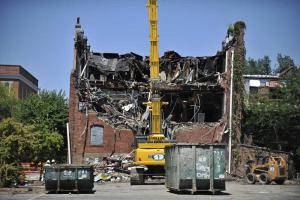 Posted at 13:05h in News, Uncategorized by Augusta Tomorrow

Plans are underway to construct apartments in place of a Broad Street building demolished after a fire in 2014.

Augusta’s Planning and Development Department received a site plan Feb. 3 for the project – a 10,000-square-foot, two-story apartment building with possible commercial space – at 12th and Broad streets. The design shows a brick and stone building housing 10 one-bedroom apartments that will rent for $900 to $1,000 and include private parking.

Property owner Michael Osbon said he is in the process of compiling construction bid documents and hopes to secure a contractor by early summer. It would likely take about nine months to construct.

The new structure at 1162 Broad St. would replace the Brislan Building, which was gutted by a Jan. 3, 2014, fire. The three-story building was more than a 100 years old and housed six apartments and Downtown Dental.

Augusta Fire Department investigators initially suspected arson, but the cause was ruled “undetermined.”

Osbon’s project has passed through the Augusta Historic Preservation Commission and been awarded a $250,000 Georgia Cities Foundation loan.

The bottom floor is being marketed for commercial use. Although garnering some interest from retailers, no contractual offers have been made, Osbon said.

Osbon said he looks at the other residential developments as encouraging signs for revitalizing and attracting retailers downtown.

“The more development that’s done like that, then the retailers will follow that,” he said. “Retail tends to follow housetops and households, and that’s a trend that’s true everywhere.”