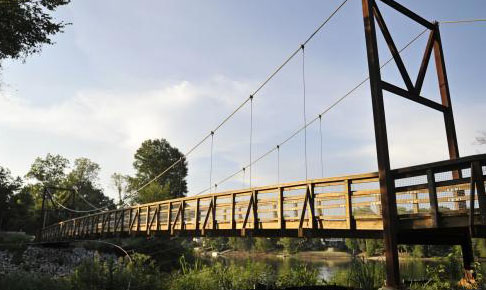 Posted at 07:21h in News, Uncategorized by Augusta Tomorrow

A nearly-complete walking, running and bike trail along the Augusta Canal featuring the city’s only suspension bridge will open up expansive views of the Savannah River and North Augusta.

The construction punchlist on the River Levee Trail should be complete in the next few weeks, said Dayton Sherrouse, the Augusta Canal Authority’s executive director. The last bit of construction activity hasn’t stopped outdoor enthusiasts from getting out on the trail, he said.

“A lot of people are already finding it, although it’s not officially open yet,” he said. “It’s a project that’s most anticipated by the public.”

Contractors for the project are working on last minute paving work. Then, signs must be installed, Sherrouse said.

The River Levee Trail begins near Goodrich Street and Lake Olmstead, loops under River Watch Parkway at Raes Creek and parallels the parkway towards downtown Augusta.

Behind Sibley and King mills, new bridges breach the tailrace areas that flow into the river.

A boardwalk gives access to the upper level of the river levee before the trail ends at Hawks Gully. Sherrouse said future funding could extend the trail even further.

The suspension bridge located behind King Mill is a highlight of the multipurpose paved trail, Sherrouse said. It offers new vistas of the river and historic mills.

“The cable suspension bridge is 190 feet long. It’s a unique, signature piece for Augusta,” he said.

The trail also features two solar-powered bathrooms with technology that eliminates odors. They were installed last month at the Sibley Mill tailrace and near the raw water pumping station.