Augusta Cancer Therapy Draws Children From Across the U.S. 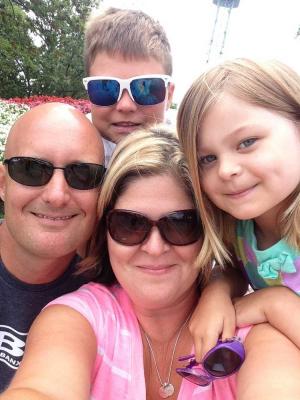 09 Oct 2016 Augusta Cancer Therapy Draws Children From Across the U.S.

Posted at 09:39h in News, Uncategorized by Augusta Tomorrow

Melanie Davis “never, never” thought she would leave her home in Virginia to seek medical care in Augusta for her daughter with a recurring brain tumor.

But a clinical trial at the Georgia Cancer Center at Au­gusta University featuring a homegrown discovery is not only the best option for her daughter at this point but is also drawing kids from other prestigious cancer centers across the country. It was designed to be tried first in children and have a trial in adults, a move rarely seen in clinical trials, officials said.

Madison Davis, 7, of Hamp­ton, Va., is being treated with Indoximod, an inhibitor of the enzyme known as IDO, whose role in inhibiting an immune response was first elucidated at the Medical College of Georgia in 1998 by a team of researchers led by Drs. David Munn and Andrew Mellor.

“From my perspective, the name of the game was always to get this into a clinical trial and to get it into a trial in kids,” said Munn, a pediatric hematologist/oncologist. But getting a clinical trial started first in children is tricky, he said.

“Most patients with cancer are adults and the last thing you want to do is have a clinical trial that harms some child,” Munn said. “So you want to make sure it is safe and effective in the adults before you start the trial in children. The problem is that means that the kids have to wait for a decade sometimes before they can start their trials.”

Because it was their discovery, and because of the relationship they have with NewLink Genetics, the company licensed to develop the drug, that was much easier, he said.

“Because we happened to invent the drug here and because the drug company that licensed it from us has been very open to doing pediatric clinical trials, that’s allowed us to start the pediatric trials much earlier than they would usually be started,” Munn said.

It also took support from cancer director Samir Khleif, but he said the trials fit his philosophy of how he is building up the cancer center.

“We have developed a very strong immunotherapy program, a tumor immunology program,” he said. “We became one of the prominent programs in the country.”

Having this allows them another unique “niche” with a pediatric immunotherapy trial.

There are very few pediatric immunotherapy clinical trials – a search of ClinicalTrials.Gov turns up 10 active clinical trials, including the one in Augusta. Part of it is the numbers game – there will be an estimated 10,380 cases of cancer this year in children 14 and younger vs.nearly 1.7 million in adults, according to the American Cancer Society.

“So the majority of people concentrate on where the bulk is” and focus on cancer in adults, Khleif said. “(But) I didn’t think that was a major barrier. I thought if we take a chance on it, we will be able to succeed and help people and develop in a way that we can be a destination, similar to what we’ve done with our adult (program).”

The trial also was helped by the arrival of another homegrown product in Dr. Ted Johnson, who got his MD/Ph.D from MCG in 2004 and had Mellor as his advisor when he was doing his doctoral thesis on IDO. His preclinical work on brain tumors and IDO helped set up the trial, and Johnson also got a key grant from Alex’s Lemonade Stand, which became a key supporter of the current clinical trial.

But it is also how Johnson has structured the clinical trial that is key to its success, Munn said. The patients, who are children whose brain tumors have come back, are getting standard therapies such as surgery, chemotherapy and radiation therapy in addition to the immune therapy. Because of the combination with immune therapy potentially providing a benefit, Johnson can use a conservative approach with smaller doses, Munn said.

“If the immune system is helping you, then even the less toxic employment of the conventional therapies may, together with the immunologic therapy, have an overall benefit that was greater than any one of those alone,” Munn said.

“What we hope is true is that every cycle of chemotherapy and every dose of radiation should stimulate an immune response,” he said. “But without the immune therapy drug, the tumor has ways of suppressing those responses so even sometimes the same immune cells that could reject the tumor actually help it heal its wounds from the chemotherapy and radiation. The same cells can do both. It actually can proactively help to heal the wounds in the tumor and work against your chemotherapy and radiation. What we’re hoping is this type of immune therapy is going to reverse that paradigm and actually amplify the damage to the tumor.”

They do not have outcome data, so how or if the therapy is helping is speculative. But Johnson said he gets positive feedback from the patients and families who have enrolled so far.

“A fairly universal sentiment among the families and the patients is that they are just generally feeling better, generally doing better,” he said. “They are able to go on vacations, be in school, spend time with their friends. They are able to have their birthday parties, sometimes birthdays they never expected to get to. These are things that really impact how they view the time they are able to spend with their families.”Outside of the first month of the trial, they only have to come back to the hospital or to Augusta once a month to do lab work and get refills. That is important because more than half of the 16 or so children enrolled live out of state, Johnson said. Some of them are patients who were being treated at major cancer centers such as St. Jude Children’s Research Hospital and M.D. Anderson Cancer Center who exhausted options there or for whom this trial now became the best option.

“We’re part of the conversation with these larger centers, too,” Johnson said.

Madison had her first brain tumor removed at another prestigious center, The Children’s Hos­pi­tal of Philadelphia, two years ago and the family thought they had beat it when a new small tumor showed up in April in the same site as the first one, Melanie Davis said. Madison got surgery again at CHOP but her mother, an emergency room nurse with a science background, began researching clinical trial options.

She initially passed over John­son’s trial because it is an early stage Phase 1 trial. But after hearing about it again from a friend whose sister’s charity donated to help the trial, she began to consider it again and was convinced after a long phone conversation with Johnson.

“As soon as I talked to him, in my heart I knew that was where we needed to be,” Davis said.

The family had ties to Augusta – Melanie’s husband, Ben, went to high school in Evans and his mother still lives there – but she never thought they would be going there for treatment. After doing more research, “I was very excited about the trial,” she said.

Madison got seven weeks of radiation therapy and the Indoximod beginning in July and started chemotherapy in September but now only has to return to Augusta once a month.

Madison is now doing “fantastic,” Davis said. “I tell people you never would even know she was sick.”

She feels good her daughter is getting immunotherapy, which is “the way cancer treatments are headed,” Davis said. “I feel that we are kind of on the front line of it. I’m grateful for that.”