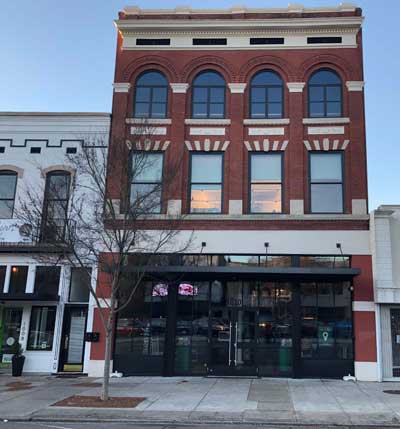 Posted at 12:58h in News by Augusta Tomorrow

Following a thorough renovation of a historic downtown building, the Augusta Convention and Visitors Bureau and Augusta Sports Council have moved into a brand new visitor center downtown at 1010 Broad St, which used to house an antique store.

The new center is designed to maximize the visitor experience in addition to being an informational hub for both visitors and locals looking to learn about what Augusta has to offer in entertainment, culture and history. What the organization described as an “experiential” space has not yet been completed.

The Augusta CVB and ASC were previously housed at Enterprise Mill. The bureau said that the new facility is still in progress.

The organizations’ offices are on the top two floors. The CVB said it plans to unveil more detailed plans for the ground floor space this fall. Currently, that space is filled with merchandise and a series of posters displaying various activities around what the organization has branded as “Augusta’s River Region.”

The move is part of a larger vision that the CVB calls “Destination Blueprint,” which seeks to make the Augusta area, especially downtown, a more dynamic tourism destination.

“It’s an experiential space,” said Augusta CVB president and CEO Bennish Brown. “It will help visitors and residents alike to get that experience of what’s available here in the Augusta River Region and inspire them to go explore more.”

Brown said he does not know when the center will be finished.

Other elements of “Destination Blueprint” include a proposed expansion of the Augusta Common to the Savannah River, golf car tourism downtown and a plan to attract more breweries and distilleries to the central business district (the owners of Carolina Moon Distillery in Edgefield, SC, recently revealed that they will open a distillery called Second City Distilling Company on 8th Street by early next year).

Brown said he’s glad to have the entire CVB and ASC back under one roof together.

“It will be innovative, it will be a place where we tell our story in a more visible and more interactive way than we have in the last few decades,” Brown said. “It’s one thing to read about that, but our challenge to ourselves is how to turn that into an experience where someone comes into this space, and they actually get to taste a dish or a treat from one of the local restaurants to entice them to now make a reservation to go eat somewhere.”

That will likely be the case with The Southern Salad, Brad and Havird Usry’s new restaurant concept that will soon open in the neighboring building. Havird Usry said in an interview earlier this year that he plans to have a door connecting the restaurant to the ground floor of the visitor center.

“It’s a great place to be, where energy exits with the kinds of businesses that we promote to travelers,” Brown said. “This is a part we play in that. It puts us certainly in the core of where visitors tend to want to go anyway.”