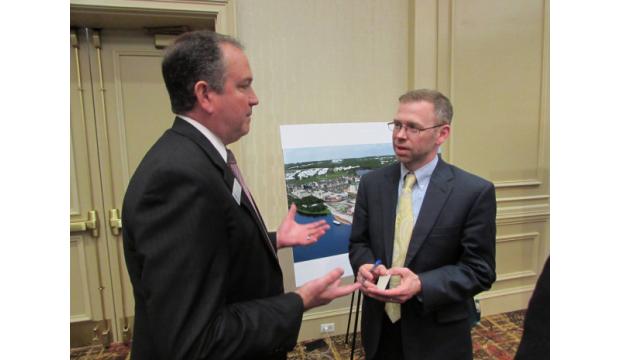 Posted at 11:47h in News, Uncategorized by Augusta Tomorrow

A former executive with the National Cyber Research Park said the Augusta region has the potential to turn its cyber assets into a $1 billion-a-year industry.

G.B. Cazes, former vice president for the Cyber Innovation Center in Bossier City, La., the anchor facility for the 3,000-acre national research campus, said the Augusta area is “well on its way” to being an international center of cyber education, operations and research and development.

The part-time consultant for the CSRA Alliance for Fort Gordon was one of several people to brief the Georgia Department of Economic Development on the progress of the “Fort Gordon Cyber District” during the department’s board of directors meeting Wednesday in Augusta.

“I think this seven-county region is going to look quite different 20 years from now in terms of the types of jobs it has,” Cazes said in an interview following the panel discussion, which included presentations from Fort Gordon Garrison Commander Col. Todd Turner, Augusta University Provost Gretchen Caughman and Unisys Vice President Jennifer Napper.

“They are what most communities want to have,” he said. “The economic impact of that research park is over $1 billion. You could have a similar effect here. Your trajectory could be very, very steep.”

The Cyber Innovation Center that Cazes was affiliated with is analogous to the 159,000-square-foot Georgia Cyber Innovation and Training Center the Georgia Technology Authority is building on the AU Riverfront Campus.

The Fort Gordon Cyber District is the regional moniker local economic development officials are using to promote the two-state metro area as a hub of cybersecurity innovation. Last month a Fortune magazine article named Augusta and Atlanta as two of the “7 Cities That Could Become the World’s Cybersecurity Capital.”

Turner said the base’s 27,000-strong workforce is going to increase as other federal agencies and private contractors seek proximity to Army Cyber Command, which is being relocated from Fort Meade, Md. Construction of the command headquarters and other upgrades at the post are consuming two-thirds of the Army’s entire construction budget.

Turner said the 56,000-acre facility’s 21st century missions, coupled with its utility infrastructure and land availability, make it a candidate to take on non-cyber missions – up to and including airborne and light vehicle operations – if Congress were to reactivate Base Realignment and Closure committees.

“If we ever do go into another BRAC cycle, we have the ability to actually absorb folks that maybe transfer in from other installations,” he told board members.

Caughman noted the university’s $6 million investment to create its Cyber Institute as well as the “Degree Completion Initiative” it launched in January for Department of Defense employees and active-duty service members.

“We are very proud of our military-friendly designation,” she said. “…We believe that we have an imperative to serve those individuals as they have served us and our country.”

Napper, the Unisys executive, will be moving this year from Washington, D.C., to Augusta, where she retired more than three years ago as major general of the Network Enterprise Technology Command.

She told the board Unisys is gearing up to employ 700 in Augusta but has room for up to 1,200. The reason the global IT firm chose the city for its service center and base of cybersecurity operations, she said, was because of the warm reception it received from the business community.

“At the end of the day, it was about the people,” she said. “It’s the people of Georgia who make a difference.”