Augusta is Already a Cyber Hub 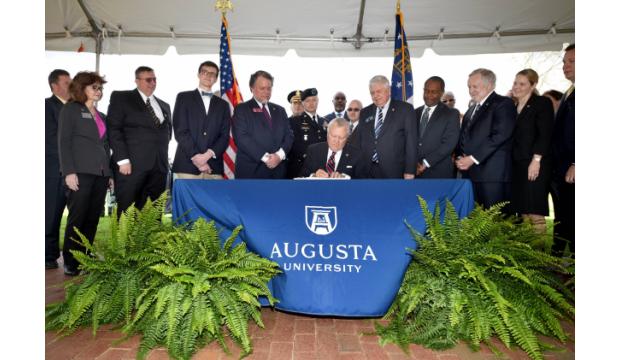 Posted at 12:24h in News, Uncategorized by Augusta Tomorrow

Wondering when Augusta will become a cyber hub?

That’s one of the findings from an Augusta University study designed to learn what regional employers are looking for when staffing metro Augusta’s current and future cyber workforce.

Co-creators of the study shared its major findings Thursday ahead of the full study’s planned release June 26.

“The workforce study has two components,” said Dr. William Hatcher, director of AU’s Master of Public Administration program. “The first part is taking a snapshot of what the data is right now, looking at the cyber workforce right now. The second component was a survey of local businesses, nonprofits and public agencies.”

The study estimated the size of Metro Augusta’s cyber workforce to be 12,716 occupations, which comprises 5.3 percent of the total area workforce. More than 77 percent of the area’s cyber jobs are at Fort Gordon.

Another finding researchers found interesting came from the employer surveys. When AU queried more than 1,500 companies of varying sizes, nonprofits and public agencies, it concluded that metro Augusta is moving toward fulfilling a prediction from Fortune magazine earlier this year. It listed Augusta as one of the “7 Cities That Could Become the World’s Cybersecurity Capital.”

“Over the next two to five years, with the survey we found we’re going to have about a 138 percent growth based on what the companies told us about the jobs they plan to add in cyber-related occupations,” Hatcher said. “The really interesting take-away from that: That’s mostly from private businesses in the area. That’s not Fort Gordon.”

And that takes into account only the businesses that already are here – not the ones likely to start in or move to metro Augusta in the next five years.

Employers told AU researchers that the top degrees they desire from job applicants are bachelor’s degrees in information technology and computer science. That finding adds to the study’s usefulness.

“How can we as a community come together and cultivate programs where we can educate people to have these types of skills and be prepared for these types of jobs and these types of roles that these companies are looking to (fill) in the next one to five years?” asked Dr. Wesley Meares, an associate professor of political science and public administration and a co-creator of the study.

Because AU already has those degree offerings, Hatcher said that strengthens the school’s ties to the community.

“So if you’re coming up, your family lives here and you’re thinking about college, we have those programs in place and were going to grow those programs,” Hatcher said. “You stay here if you’re going into some kind of computer science instead of going to Georgia Tech. We keep you here and we’re more likely to retain you.”

Creators started designing the study in February and began researching federal labor statistics. Completed surveys were sent the last full week of March – or the week before Masters Week, in hopes of catching employers ahead of the popular golf tournament.

AU sent out 1,554 surveys and 304 were returned. Of those, 278 were “completed to the point of usefulness,” Meares said. That makes a response rate of almost 18 percent, which increases the accuracy of projections.

“Usually when you do surveys the response rates are about 5 to 10 percent,” Hatcher said.

“We were really happy we got upward toward 20 percent. I feel it’s going to be more representative that we got that higher response rate.”

AU also is working on a website to publicize the findings, which will tie to both the school’s MPA program and its Cyber Institute.