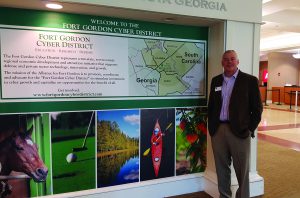 Posted at 09:29h in News by Augusta Tomorrow

The CSRA is poised for a once-in-a-lifetime opportunity to become to cyber what Silicon Valley is to computing. Dr. Tom Clark and the Alliance for Fort Gordon are at the forefront of making sure the area doesn’t miss its chance.

In 2019, the Army will officially move its Cyber Command to Fort Gordon, making it the epicenter for all things involving computer software, hardware and networking. Its focus will be on how to protect the United States’ networks, how to attack an enemy’s network and to understand all the nuances of warfare in a digital age.

“It’s not sexy like a tank or a plane,” Clark said, “but they’re taking UAV footage from Iraq and Afghanistan in real time, analyzing it and then send it back (to the battlefront) in real time. The folks at Fort Gordon are saving lives on a daily basis.”

For the first time ever, the Army will be placing the operational army and the training and doctrinal command on the same base. That will allow both to learn from each other in real time.

Clark, executive director of the Alliance, has gone so far as to label the Augusta area the “Fort Gordon Cyber District” in anticipation of what he expects will happen over the next decade. The district encompasses seven counties in Georgia and South Carolina.

“Our mission is to promote and advocate for this area to become the Silicon Valley of the South by 2020,” Clark said. “We are well on our way to do that. Fortune magazine said we’re the dark horse to do that. I believe that horse is up and running in the race.”

Cyber Command is a key component in nosing that horse into the lead, and the ramifications of that are becoming evident in the Augusta area.

Fort Gordon has already brought thousands of soldiers and their families to the area over the past few years, and expects to add another 1,200 soldiers and 3,000 of their family members in 2019. Companies dealing with cyber technology have begun opening offices in Augusta and more will come.

But it isn’t just companies involved in cyber who will benefit from Augusta’s new role. Even low tech companies like barbershops, pizza joints and gas stations will benefit.

“As Fort Gordon grows, so does the community,” Clark said. “Every job on post creates two jobs off post.”

While most of the growth so far has been in Columbia County, especially in the Grovetown area, Clark said the impact will be felt throughout the CSRA. Each community, from Edgefield and Aiken to Thomson, offers unique characteristics that will appeal to different soldiers and their families. That includes more than 13,000 retired personnel who choose to stay in the area.

But the race to be the cyber version of Silicon Valley isn’t a runaway. One of the major hurdles is education.

Nationally, the number of cyber jobs will rise to 6 million by 2019, but the country is about 1.5 million short of meeting that. The Augusta area is no exception in running short of qualified cyber professionals.

To that end, the Alliance for Fort Gordon is spearheading an effort to infuse cyber training into CSRA schools, eventually from kindergarten through college. It has already started at all Columbia County middle school levels.

“We want to be champions of education, innovation and entrepreneurship,” Clark said. “We want to develop a cyber technology culture.”

Augusta University has already taken the first steps toward becoming a world leader in cyber education, launching its School of Computer and Cyber Sciences in July. The Georgia Cyber Innovation and Training Center is under construction on AU’s Riverfront Campus on Reynolds Street.

Clark said Generation Z, those under age 20, are a natural fit for this education because they were born into the digital age.

“In many cases they’ll be the experts and in some cases you’ll have the students teaching the class while the older generation catches up,” he said.

The goal is to create a self-sustaining community where students stay after graduating.

“We’re creating these jobs so our children will have the opportunity to stay in the community, make a contribution to their country and earn a great wage while doing it,” Clark said. “It’s not just cyber professionals we need, but engineers, plumbers and support staff.”

And that could create some big changes in the CSRA in the next dozen years.

“Maybe by 2030 we’ll be living in a city with self-driving vehicles, where the workforce has no physical building and we’ll be the world leaders in cyber technology and security,” Clark mused. “We’ll have the whole world coming to Augusta to learn from homegrown experts about protecting cyber and protecting the earth.”

But that future requires the right actions now.

“We’re in a unique position to capitalize on this once-in-a-lifetime opportunity,” Clark said. “There are a lot of places worldwide that can’t believe they’ve missed out on this opportunity.”