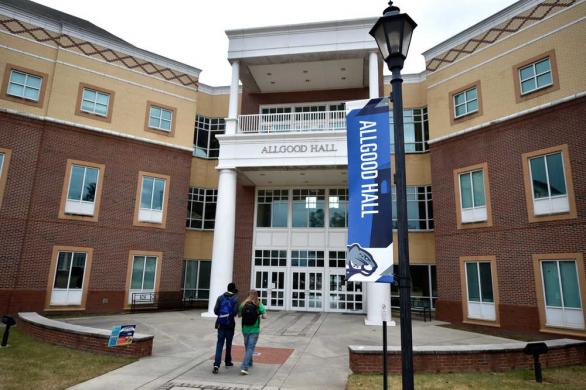 Posted at 12:16h in News, Uncategorized by Augusta Tomorrow

Moving a college, new buildings and a lot of renovation are all part of the Campus Master Plan for Augusta University that will transform both campuses.

AU released its plan for capital projects and changes to run through 2023, a plan that could potentially cost “hundreds of millions of dollars” if fully implemented, said Chief Business Officer Tony Wagner, though no figures have yet been affixed to it.
The university is planning for enrollment growth in all nine of its colleges over that time period, along with overall enrollment growth of 20 percent, from 7,172 to 8,603, and 38 percent growth in faculty, from 1,325 to 1,830.
But those growth plans depend on first moving the College of Science and Mathematics from the Summer­ville campus to the Health Sciences campus, then renovating the main buildings on the Summerville campus to allow for growth of the three remaining colleges there, Wagner said.
“Right now, we do not have a lot of excess capacity across any of our programs, whether it be research or undergraduate instruction,” Wagner said. “In the near term, the first domino to fall hopefully will be moving Science and Mathematics to the Health Sciences campus” and into a new building.
That project has been discussed with the University System of Georgia but has not yet been approved, he said.
Most of the university’s plans will look at renovating existing space rather than putting up new buildings, Wagner said.
“A key planning principle was definitely to focus on maximizing existing space and then renovating before building new,” he said.
Of the 4.2 million square feet that will be affected by the plan, only 718,700 would be new construction, according to the plan.
One big change on the Health Sciences campus will convert large parking lots in the middle of campus into grassy quads.
“We see those (lots) as opportunities to put in quads that will allow for outdoor recreational space. They will be much greener, much more pedestrian-friendly, and then push the parking to the perimeter,” Wagner said.
That includes the construction of new parking decks that will flip the university’s parking from 60 percent surface lots to 60 percent “structured parking,” he said. It will increase the number of spaces from 8,045 to 9,686.
What has not been included in the plan yet is what will be done with the health system’s facilities. Part of that was officials waiting on the outcome of some key factors, such as the fate of the certificate of need awarded to the health system to build a 100-bed hospital in Columbia County, which prompted a lawsuit from Doctors Hospital of Augusta. Wagner said he anticipated that planning would be done within six months.