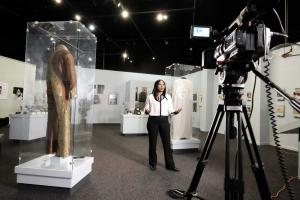 Posted at 08:29h in News, Uncategorized by Augusta Tomorrow

C-SPAN is in Augusta to record and feature the city’s history, culture and literary life.

From visiting the Augusta Canal to hearing renditions of James Brown’s greatest hits in the Augusta Museum of History, C-SPAN’s Adrienne Hoar spent Monday and Tuesday filming Augusta’s most important cultural and historical sites for a documentary set for a late summer broadcast on the network. Hoar, a video journalist on her first visit to the Garden City, said there was much more to it than meets the eye.

“It’s been a lot of fun to see Augusta in this way,” Hoar said. “This city is really rich in history, and I’m glad I can show that to the rest of the country.”

The documentary is part of C-SPAN’s2015 Cities Tour, a series exploring the literary and historical life of “mid-size” cities across the country. The C-SPAN crew visited historic sites, interviewed local historians, profiled Augusta-based authors and visited area schools for the Augusta specials, which will be aired in segments on C-SPAN 2 and C-SPAN 3 on Aug. 1-2.

“It’s been a very busy past four days for us. That’s a short amount of time to get the level of detail we wanted,” C-SPAN coordinating producer Debbie Lam said. “All of the cities we feature through our tour are smaller and not as well-known nationally … we want to give an inside window into these cities that not everyone gets to see.”

Segment subjects cover James Brown’s impact on the Civil Rights movement, the building of the Augusta Canal, a profile on educator Lucy Craft Laney and interviews with local non-fiction authors.

C-SPAN’s staff was met by Mayor Hardie Davis, Historic Augusta Executive Director Erick Montgomery and Comcast Senior Manager of Government & Regulatory Affairs Shannon Dulin at the Boyhood Home of Woodrow Wilson on Wednesday. Davis said he was pleased to welcome them to “one of America’s most amazing cities.”

“I’m excited that this is happening. I’m very proud … I’m glad we can showcase the rich history and culture we have here in Augusta,” Davis said. “This shows that we are a player on the national stage, as well as showing the world we are a great place to work, play and live.”

Robert Mullins, writer of 12 Monkeys and A Green Jacket, said it was “fantastic” that the network chose to visit Augusta.

“We have so many great stories from our past,” Mullins said. “It’s definitely worth working to record.”