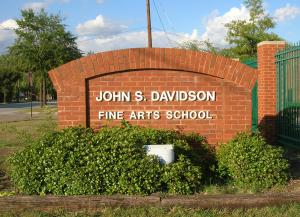 Posted at 14:19h in News, Uncategorized by Augusta Tomorrow

Davidson was one of 285 public schools and 50 private schools nationwide to earn Blue Ribbon recognition this year. The reward is given to schools that have overall academic excellence, or to schools that have dramatically decreased achievement gaps among their student populations.
Principal Renee Kelly said she was “so honored” that her school earned the title, crediting “outstanding students” and hardworking teachers for the school’s success. She added that Davidson also received the Blue Ribbon recognition in 2004.
“Everyone has worked so hard here to make sure we’re a high performing school, and without that we would have never received this distinction,” Kelly said. “Our students, staff, families and community all contribute to our ability to perform well and have high academic achievement.”
A small group of Richmond County Board of Education members, central office staff and students gathered outside the school to celebrate, unfurling a banner acknowledging the school’s designation.
Board President Helen Minchew said the school board was “very proud” of Davidson’s performance and that she was “appreciative of the school’s committed students.”
“We are so proud of the fact that Davidson has consistently performed so well they have earned this reward twice,” Minchew said. “You can tell the school’s staff works hard to engage their students, and that commitment pays off.”
Davidson will be recognized during a ceremony in Washington, D.C., on Nov. 9 and 10.