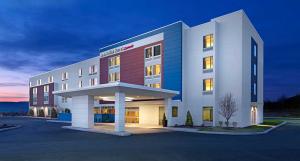 Posted at 08:06h in News, Uncategorized by Augusta Tomorrow

The developer of Augusta’s Resi­dence Inn Marriott and the proposed SpringHill Suites Mar­riott near the intersection of Marks Church and Wheeler roads says the city’s economic growth is encouraging it to consider building more hotels in the future.
Ramesh Gokal, the president of Warner Robins, Ga.-based Peach State Hospitality LLC, said major investments such as Fort Gordon’s expanded cybersecurity missions and Plant Vogtle’s reactor construction are helping generate year-round business in an industry that has historically spiked during Masters Week.
“Augusta has become a very well-rounded city,” Gokal said. “Obviously, the Masters makes it world famous, but the base expansion and the nuclear plant and all hospitals and corporate growth (have) made it a very attractive hotel market.”
Peach State Hospitality opened the 124-room Residence Inn last summer on a 3.6-acre parcel near the Wheeler Road-Bobby Jones Ex­pressway interchange. Con­struc­tion for the 88-room SpringHill Suites hotel – on an adjacent 3-acre parcel – will begin in the next 90 days, Gokal said.
He said completing the Spring­Hill Suites project would take 12 to 15 months, after which time the company might consider developing its third hotel on another site.
“We’re looking around with a possibility of another one down the road,” he said. “We like the Augusta market and we want to have a good presence.”
Peach State Hospitality’s other hotels, situated primarily in middle Georgia, operate under other Marriott brands and through affiliations with Best Western, Holiday Inn Express and Candlewood Suites. Company founder and CEO Dilip­kumar “Danny” Patel also is a founder of American Pride Bank, which operates branch offices in Warner Robins and Macon, Ga.
The four-story Residence Inn is an extended-stay hotel that targets primarily corporate travelers. The future SpringHill Suites, which would be the first of its kind in the Augusta market, is more like a traditional hotel that features larger, suite-style rooms in the upper-moderate price range.