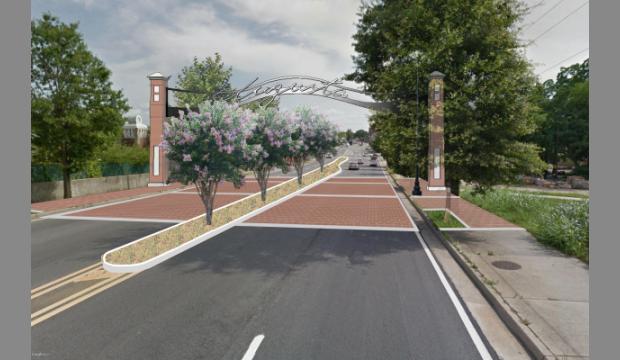 Posted at 09:47h in News, Uncategorized by Augusta Tomorrow

Augusta’s decision to program millions of Transportation Investment Act dollars into the downtown streetscape hits a milestone this week with the release of concept drawings showing a radically altered downtown.

Going for public review at three meetings scheduled this week, the images reveal a transformation of Broad, 13th and Sixth streets to pedestrian-friendly thoroughfares united by common features such as brickwork, lighting, signs, street trees. Two different drawings for each street are included.

For Broad Street, “a destination to transform downtown life,” each concept drawing eliminates the unpopular sunken median parking wells designed by renowned architect I.M. Pei in the 1970s and replaces them with street-level parking surrounding new features in the median.

Concept 1 shows a “central park zone” in the median between Seventh and 10th streets of gardens and other park space and increases overall parking on Broad from 825 to 870 spaces. Concept 2 shows public spaces such as a biergarten, urban plaza and boardwalk through the median, but decreases the number of spaces from 825 to 722.

Each 13th Street concept drawing shows a dramatic “gateway zone” greeting visitors with a landscaped median as they enter downtown from South Carolina. Concept 1 provides a “gracious welcome” with an arch over the road stating “Augusta” in script, while Concept 2 reveals an “iconic gateway” with a tower proclaiming the city name and festive brickwork. Historic trails are marked, and the John Calhoun Expressway underpass is adorned either with public art or history features.

MORE: Scroll to the bottom of the story to download the concept art. Note files are as large as 160MBs.

Seven blocks away, the Sixth Street concepts each attempt to beautify the rail line that intersects the road and enhance the road’s end at Riverwalk Augusta. Concept 1’s theme is “celebrate the railroad” and shows grassed-over train tracks lined with planted beds and a curb. Parallel parking on Sixth Street is eliminated, while Concept 2 retains parallel parking with a simpler curb around the tracks.

The plans are the work of Cooper Carry, an Atlanta landscape architect firm that’s been on hand for more than a year, and several subconsultants brought on board to help.

Gary Warner, associate principal with Cooper Carry, said the streets are three of seven downtown for which the firm is creating concepts to present to the public.

Work on a James Brown Boulevard concept also is complete, and “after next week, we come back with the other three streets,” Warner said.

“We present those concepts, sit down with the city and figure out what the final plan is,” he said. “We probably still have another year, eight months of work before any dirt starts to turn.”

The other downtown streets are Fifth, Greene and Telfair.

The Metro Augusta Chamber of Commerce is holding a preview of the concept plans Monday ahead of two public sessions Tuesday and Wednesday.

The discussion will extend beyond the plan drawings and cover policy issues such as parking management, traffic circulation and lighting. Cooper Carry hasn’t made a recommendation about the need for parking meters.

A team also has worked with the Augusta Museum of History to recommend interpretive history components.

The downtown projects are among the city’s largest expenditure of Transportation Investment Act funds, the 1 percent sales tax that expires in 2023 and totals more than $83 million. The most costly downtown street project is Broad at almost $25 million, followed by Telfair at $19 million.

Augusta’s decision to dedicate TIA resources to sidewalks and other streetscape features sets it apart from other jurisdictions that tend to focus on traditional roadwork.

“Predominantly a lot of TIA work is structural rehabilitation,” said Karen Judd, communications director for the program. “Something that Augusta should be praised on it has put a lot of attention to what happens when you get out of your car. Transit, sidewalks, bicycle lanes, all that is a mode of transportation, and makes it safer for drivers as well.”

Unlike previous downtown plans, the TIA project has a guaranteed funding source if it adheres to state guidelines.

All projects must be developed and under contract by the time the TIA expires, at 10 years or when collections reach a target amount, Judd said.