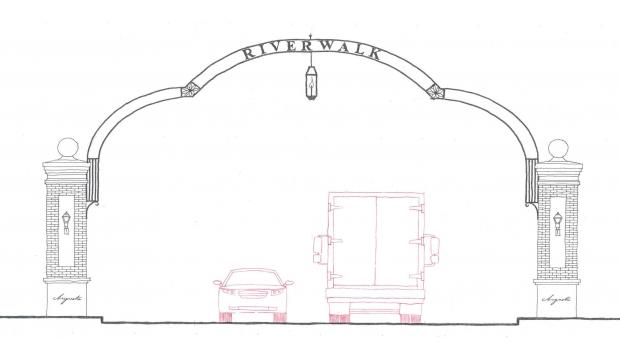 Posted at 14:18h in News, Uncategorized by Augusta Tomorrow

But that should be less likely to happen if Augusta commissioners approve two proposed archways on Reynolds Street designed to serve as visible gateways to the riverfront recreation area.

The Downtown Development Authority approved Thursday a design concept for the arches, which would be built at the intersections of Eighth and Ninth streets.

“Those were the strategic corridors; near the Augusta Common, near the center of everything,” said Rick Keuroglian, chairman of the authority’s design committee, which settled on a design from three concepts created by Atlanta-based Cooper Carry, the architecture firm overseeing the city’s transportation tax-funded downtown streetscape projects.

The two wrought-iron arches, funded by special purpose local option sales tax funds and budgeted at roughly $270,000 each, would span the entire width of the street with the word “Riverwalk” centered at the top. They would be anchored to LED-illuminated concrete supports faced with red brick designed to mimic the look of historic downtown buildings.

“This was the one we gravitated toward the most,” said Keuroglian, director of community development for First Presbyterian Church of Augusta.

The Eighth Street arch would span the street from the corner of the historic Augusta Cotton Exchange building to the dirt parking lot across the street. The Ninth Street/James Brown Boulevard arch would stretch from the Augusta Convention Center to the Beamie’s At The River restaurant and tavern.

The archway proposal could go before the Augusta Commission for final approval as early as next week. If approved, the project could be completed within seven months, Downtown Development Authority Director Margaret Woodard said.

The authority’s Riverwalk Augusta improvements also include pre-fabricated shade structures that would be placed at various locations along the riverfront attraction. Woodard said those locations have not yet been finalized.