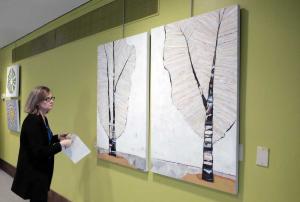 Posted at 09:50h in News, Uncategorized by Augusta Tomorrow

After months of delays, the former Metro Augusta Chamber of Commerce building in the median of 600 Broad Street will open its doors to the general public with an art exhibition for First Friday.

From 5 to 10 p.m., the public is invited to an exhibition of new works by artists Staci Swider and Chase Lanier and works by Ruth Paul and Regina Bredja at the unique space, deemed by city inspectors as finally fit for occupancy, said artist Syd Padgett, now the building’s manager.

The project managed by the Augusta Regional Collaborative was scheduled to open in August but was delayed after city inspectors said it needed an accessible restroom on the first floor. Inspectors later returned with additional requirements including addressing issues with wiring and a fire sprinkler system, Padgett said.

“The permitting process, it could have gone a lot better on their end,” he said.

The city-owned structure, opened in 1978 and designed by Chinese-born architect I.M. Pei, has been vacant since the chamber relocated in 2010.

Now up to code, ARC is reaching out to a list of selected tenants for a nominal rent while other groups may use its spaces for meetings, he said. Artists’ Row, an organization of downtown galleries, or Metro Augusta Arts Council will hold an arts event in the building every First Friday, Padgett said.

“We’re trying to get everybody back together and let them know we’re ready for prime time,” he said.

Lanier and Swider were pleased Wednesday with the building’s pending opening as they installed works for the exhibit.

“It’s really a nice space to move a lot of people through, and once the public begins to use the building more and more – if their office is too small, they can come here to meet – there’s art available that showcases the artists in the city,” Lanier said.

“The local artists get to show their work and reach a wider audience of businesspeople during the day that they might not otherwise get to see on a Friday night,” Swider said.

The renovated space could breathe new life into the lower-middle blocks of Broad, as most nightlife and retail stops at Eighth Street, Swider said.

“Physically, this could be the hub of downtown,” Lanier said. “And literally being in the middle of the street is fun too.”

The opening is ARC’s first tangible success. Created by former Mayor Deke Copenhaver in 2012, ARC obtained a five-year lease in 2012 and received $100,000 in city funds in 2013 and $300,000 last year for a variety of stated purposes, including the creation of a Mills District around Augusta’s historic textile mills and a Cultural District downtown.

Plans for a Mills District, despite voters’ rejection of a May 20 sales tax referendum that would have included funding for the project and Georgia Regents University’s lack of interest in the district for student housing, will continue, ARC Executive Director Matt Kwatinetz has said.