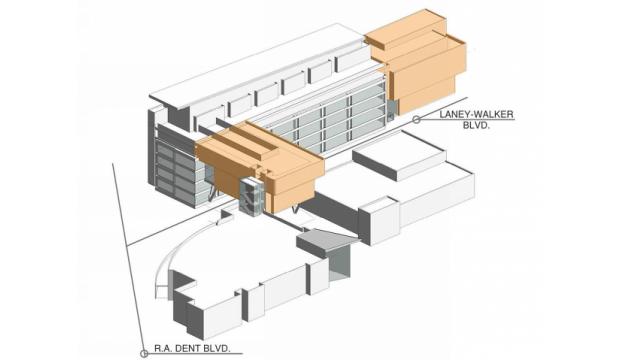 Posted at 12:59h in News, Uncategorized by Augusta Tomorrow

Cancer Research Building extension to be more than just physical connector. The $62.5 million project will stretch above Laney-Walker Blvd.

A large steel girder now welded against the side of the M. Bert Storey Cancer Research Building stretches across Laney-Walker Boulevard toward the Georgia Cancer Center outpatient building, where it will one day help connect them, providing both functional and symbolic links.

The three-story connector between the buildings, and a five-story extension of the Research Building parallel to Laney-Walker, are starting to round into form at Augusta University as crews work to finish the $62.5 million project expected to be completed in just over a year.

Workers last week welded one of the beams that will support the connector a couple of stories above the street, and link the research and clinical sides.

“Always the problem in medicine is the basic science people never talk to the clinicians, so here’s about as close as you can get,” said Dr. David Hess, the interim dean for the Medical College of Georgia.

“You don’t have to go outdoors any more,” he said. “That is symbolic, but also real.”

The connectors will have offices and provide access for collaboration, but more important is the 72,000-square-foot addition to the research building, which will include 6,000 square feet of renovated space in the current building.

“There is going to be quite a bit of extra research space there,” Hess said, adding that work to flesh out those floors has progressed well. “It’s going up pretty fast. And we really need it because the lab space is filling up pretty quickly. The basic science research has grown.”

There has been an administrative renovation as the cancer center, which once reported to AU’s president, has been brought back under the MCG dean. Checking with other cancer centers at other institutions found that most handled it this way, Hess said.

“What we’re trying to do is coordinate it better with the medical school, the academic and the teaching components, and the departments,” he said. “We’re trying to break silos down. It is very important that it has a good relationship with the departments of surgery and of medicine, pediatrics.”

That makes more sense for those working in basic research, too, such as the department of biochemistry and molecular biology, Hess said.

There is still a need to recruit a new cancer center director, but that search has not yet begun. AU President Brooks Keel wants to wait until there is a permanent dean named for MCG, Hess said. That formal search has not yet begun, but could start as early as the next fiscal year, which begins July 1, said AU spokeswoman Christen Engel.

When it is finished, the three-story connector over the road will serve as a gateway sign for those entering the Health Sciences campus from that side, something that has been needed, Hess said.

“That’s important because one of the problems we have is you don’t even know when you are on our campus,” he said. Along with the gleaming new Dental College of Georgia building and the J. Harold Harrison Education Commons building just down R.A. Dent Boulevard from the cancer project, “It’s a pretty nice new campus on this end,” Hess said.