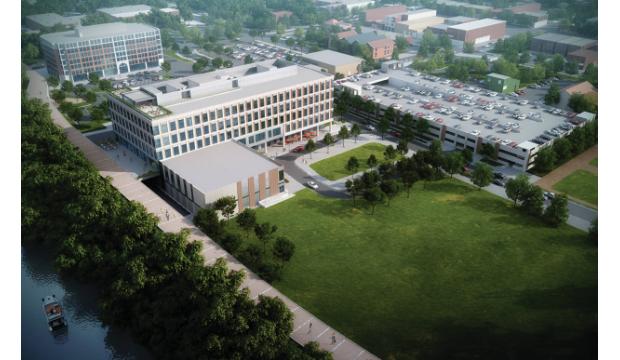 Posted at 14:36h in News by Augusta Tomorrow

On a campus that now bears his name, in a building he pushed for a little more than a year ago, Gov. Nathan Deal dedicated Thursday night the second building at the Georgia Cyber Center in what he hopes will be “a facility that will have longterm generational effects.”

The 165,000-square foot Shaffer MacCartney Building is a mirror image of the Hull McKnight Building that opened in July, and is named for Michael Shaffer, executive vice president for strategic partnerships and economic development at Augusta University and a former aide to Deal, and Teresa MacCartney, the state’s Chief Financial Officer and director of Deal’s Office of Planning and Budget. The two are known more for work behind the scenes than in the spotlight – Shaffer joked that it was his first and last time at a podium – and got emotional as they thanked family members and spoke warmly of their time with Deal, with MacCartney calling it “a labor of love for me” to serve with him.

But rather than a legacy, they see the future in the building that bears their names.

“Georgia Cyber Center is the newest bridge between the learners of today and the jobs of tomorrow,” Shaffer said. “Right now, we are literally sitting on the cutting edge of the next-generation jobs and capabilities. Here tonight, we are seeing the future brought to the present. To paraphrase the old saying, not only is the future now, it is right here, right here in Augusta and in the state that leads on so many other fronts as well.”

“It is a historic asset that will carry us well into the future,” MacCartney said.

While the center is in its infancy, “it is one that I have no doubt will in the years to come create a great legacy, not for me individually but for our state and for the opportunities that it will provide for citizens of our state as well as providing the skills our country needs,” Deal said. “We are already seeing the advantages and benefits from this being built.”

The new space will serve as an incubator and hub for innovation with much unfinished space that can be custom-built for technology companies and start-ups that want to locate there. The space could be filled tomorrow with companies just looking for great office space but the center is going to be careful about who is allowed to locate there, said Augusta University President Brooks Keel, whose organization is handling the day-to-day operations.

“We want people who can contribute to the ecosystem here,” he said, where academia, industry and military partners work together on problems and solutions.

The buildings went up in record time – Deal first announced the first one in his State of the State in January 2017 – and interest was so great he announced the second building that November. Deal joked that it was in the fine print of the contract that the buildings be completed before he left office and the dedication comes with four days to spare.

All but 3,000 square feet are unclaimed in the first building, said Eric Toler, executive director of the Cyber Center. As he looked around the unfinished space where the ceremony was held, he thinks the second building will not be far behind.