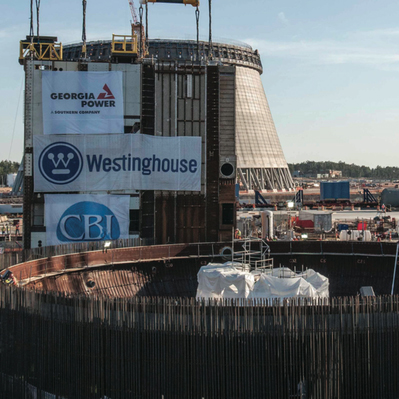 Posted at 08:57h in News, Uncategorized by Augusta Tomorrow

The $14 billion nuclear expansion project at Plant Vogtle remains on schedule and within budget, Georgia Power Co. reported Thursday. In a semi-annual construction update filed with the state Public Service Commission, the Atlanta-based utility indicated it spent $198 million during the first six months of this year on the two additional reactors under construction at the nuclear facility south of Augusta, Ga. That brought Georgia Power’s total spending thus far on the project to $2.8 billion. “We’re making great progress,” said Buzz Miller, Georgia Power’s executive vice president for nuclear development. “It’s changing every day.” The first of the two new reactors, Unit 3, is due to go into service during the fourth quarter of 2017, with Unit 4 to follow a year later. While that timetable didn’t change in Thursday’s report, Miller said Georgia Power is working with its partners in the project to address some “challenges” to the schedule. “We’re continued to press the consortium to keep this thing on track,” he said. Miller said there are significant differences between Plant Vogtle and a nuclear project underway in South Carolina, which is experiencing construction delays announced this month, even though both are using AP1000 reactors designed by Westinghouse. “We have a fixed contract,” he said. “They have a contract that’s a little more open-ended.” Ultimately, the Plant Vogtle project is projected to have an impact on Georgia Power customers of 6 percent to 8 percent. However, financing costs the utility already has recovered from ratepayers under a plan approved by the PSC will reduce that impact to 2 percent to 4 percent, Miller said. Source: Atlanta Business Chronicle Author: Dave Williams/Staff Writer Date: 8/28/2014