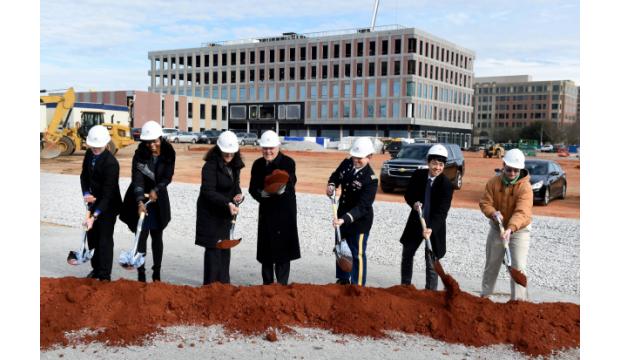 Posted at 12:50h in News by Augusta Tomorrow

The centerpiece and catalyst for an expected booming cyber business in Augusta kicked off a new piece Wednesday with Georgia Gov. Nathan Deal headlining the groundbreaking for a $35 million addition to the Hull McKnight Georgia Cyber Center for Innovation and Training.
And some say it is already pushing the area out onto the world stage as a leader in cybersecurity because of all the resources surrounding the center.

“This is a great facility that is going to provide promise, going to provide opportunity and going to change the lives of Georgians and the people of our great nation,” Deal said. “I’m just glad it is right here in Augusta, Ga.

The 165,000-square-foot second building, which will serve as an incubator for related cyber businesses in the private sector as well as additional training and workforce development space, comes while work still remains on the $60 million 167,000-square-foot center on Augusta University’s Riverfront Campus. That piece is on pace to open July 10 as Deal requested.

The expansion, which will essentially be a mirror building of the first, is expected to open in December. With a $12 million parking deck provided by the city of Augusta, the project easily tops $100 million .

There were always plans to add a second building on the site in a few years but the response was so great to the first building there was not enough room for all of the private contractors and related businesses and agencies wanting to come in, said Calvin Rhodes, executive director of the Georgia Technology Authority, which is building the center.

“That was a catalyst for speeding up the timeline,” he said. By starting construction on the second building while the first is still underway, the project can use the same contractor and some of the same resources, Rhodes said.

“There’s a lot of synergies to doing this now,” he said.

The center will house the AU Cyber Institute and School of Computer and Cyber Sciences, as well as the cyber crimes unit for the Georgia Bureau of Investigation and will be the center for cyber training for all state agencies. The day after the building is opened and dedicated on July 11, it will host a conference on technology for about 150 state and local officials that used to be held in Atlanta, Rhodes said.

Numerous private contractors are also leasing space and are expected to offer fellowships and internships in conjunction with the education and training programs. Having those businesses buy in and become part of the center was crucial, Deal said.

The new building provides “space that can be rented by companies that are start-up companies, companies that have ideas they want to try and perfect,” he said. “I think it is a great component to it. Without it, we may be training people here that would have to go somewhere else to have those start-up opportunities. It made more sense to have it right here next to the original training facility. The indication is from the private sector community that it is going to be a very worthwhile investment. The indication is we’ve had great acceptance of it.”

The original impetus for the state investment was seeking to build on the $2 billion the federal government is putting into cybersecurity programs at Fort Gordon, such as through initiatives at the U.S. Army Cyber Center of Excellence and the Army Cyber Command, which is moving its headquarters to the fort by 2020. Deal credits his staff, including Teresa MacCartney, head of the Office of Planning and Budget, for pushing him to take advantage of that.

“We thought it was a great opportunity for us to be a good partner and also to go forward with a common enterprise,” Deal said. The state has helped create incubators that seek to foster public-private partnerships in technology but probably not to this extent, MacCartney said.

“This is probably very unique,” she said.

Army Cyber works closely with the National Security Agency, which also has a sizable presence at the fort, and both have significant numbers of private contractors that work with them, many of whom are expected to follow the move of Army Cyber to the area. While it may not be obvious, that is also a significant resource in the area, said Tom Patterson, chief trust officer for Unisys, a global information technology company with a large presence in Augusta just down Riverwalk Augusta from the center.

“The intelligence community is well-represented in this area and is a huge partner for innovative cyber capabilities coming out around the world,” he said.

Patterson was one of the speakers who referenced a Fortune magazine article on seven cities vying to become the World’s Cybersecurity Capital, with Augusta listed as the “dark horse” against much larger competitors like Boston and London.

“Thanks to you and your leadership, sir, that horse is up and running,” Dr. Tom Clark, executive director of the Alliance for Fort Gordon, told Deal.