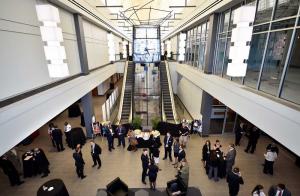 Posted at 12:18h in News, Uncategorized by Augusta Tomorrow

Generally speaking, he noted, they mean that companies are ready to begin work immediately.
On Monday, Ingram joined Gov. Nathan Deal, U.S. Rep. Rick Allen, Augusta Mayor Hardie Davis and Unisys Corporation executives outside the old Fort Discovery building along the Augusta Riverwalk to celebrate the opening of the company’s newest client service center and the potential to create up to 700 jobs over the next five years.
The event was the most recent of milestones since Deal announced that Unisys would come to Augusta in November 2014. The company formally moved into its riverfront office last year after using temporary space, and true to Ingram’s word, employees were already at work by providing Army help desk IT services among others from its Augusta location.
“Today, we are moving forward and are one step closer to becoming the cyber hub of America,” Davis told the crowd gathered on a brick walkway behind the building.
Seeing that Augusta was already home to the Cyber Center of Excellence at Fort Gordon and is the future home of Army Cyber Command, Unisys Federal President Venkatapathi Puvvada said the company found it advantageous to augment services by opening another campus near one of its largest clients.
The search was a seven-month-long process that evaluated more than 100 locations. Augusta was particularly appealing because of its workforce potential.
“Beyond providing close proximity to Army clients, our base in Augusta gives us access to pull out knowledgeable veterans who are making a transition into civilian life,” he said.
The company has hired eight new employees recently and at least seven of them have direct ties to the military, Puvvada said.
“We should not lose those skills or those talents, and we are perfectly situated here in Georgia to be able to take full advantage of that,” Deal said.
Unisys has also started an internship program with Augusta University and expects to bring in 10 students to learn the industry. Many will have the chance to be hired on full-time.
Deal added that new scholarship opportunities in the technical school system could prove as feeders into the industry, perhaps providing Unisys and others with in-demand talent.
“One thing is for certain, if they get qualifications in those areas, they’ll get a job,” he said. “In my opinion, that is the ultimate purpose of higher education.”