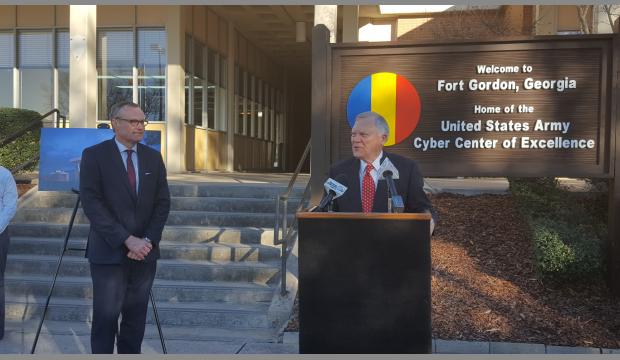 Posted at 14:42h in News, Uncategorized by Augusta Tomorrow

The recently announced Cyber Innovation and Training Center could put Augusta at the pinnacle of cybersecurity and training in the nation, Gov. Nathan Deal said Tuesday during a tour of cyber and intelligence facilities at Fort Gordon.

Deal, along with Lt. Gov. Casey Cagle and Augusta University President Brooks Keel, got a look at military operations in the cybersecurity realm to get a better understanding of how the future training center will operate. The Cyber Innovation and Training Center will be built downtown as the Army constructs facilities to relocate the headquarters of the Army Cyber Command from Fort Belvoir, Va. to Fort Gordon. Deal called the center a “cyber range” on which trainers will work with students to hone their skills on the cyberwarfare battlefield.

“Sometimes we hate to think that we are living in a world where we have to combat the attacks that so many industries, government and others, are being impacted by, but it is a reality,” Cagle said. “We want to make sure Georgians are safe, and we are taking the steps to do that.”

Of the tour, Deal said, “They gave us a better understanding of the various cybersecurity efforts that they now command and control, and I must say it is impressive.”

He said the new center will depend on a number of state entities, including the Georgia National Guard, the Georgia Technology Authority and various universities and technical colleges, especially Augusta University. Deal said the Department of Economic Development would also play a role because of the growth in business and workforce expected to accompany the center.

Though he did not give an estimate of the number of jobs expected to be created, Deal did say it would be a considerable number and that roads and infrastructure will need to be updated as the private-public partnership gets underway.

Deal noted the importance of private sector involvement because of the pervasive nature of cyberattacks, saying the world we live in is steeped in networked devices.

He said even common household items such as refrigerators can now be hacked, and teams at Augusta University are working on fighting hacks against biomedical equipment such as pacemakers.

Deal, Cagle and Keel all said the inclusive approach to the center will make it unique.

Keel said the new center will allow Augusta to become a magnet for industry and give the community a vital role in national security.

According to the governor, about $1 billion in construction and upgrades is planned at Fort Gordon during the next three years as the Army Cyber Command settles in. Deal said his proposed budget for fiscal year 2018 contains $50 million for the Cyber Innovation and Training Center, which he expects to be completed in early 2019.