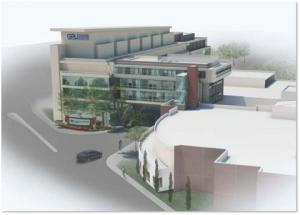 Posted at 11:39h in News, Uncategorized by Augusta Tomorrow

The expansion of cancer research at Georgia Regents University is getting closer and the buildup of the cancer program overall is on pace to bring the GRU Cancer Center closer to a long-sought designation, the center’s director said.

Groundbreaking on the expansion of the current research building, which will include a three-story space above Laney-Walker Boulevard, is probably a month away, Director Samir N. Khleif said. It will actually have two primary pieces, he said. One will be a five-story extension out of the current building along Laney-Walker toward the research space at GRU and taking up almost half of the greenspace currently in front of the building, he said. That expansion will include a small conference center on the first floor, administrative space and then additional lab space above that, Khleif said.

That will enable GRU “to be able to hire more people, to recruit more people, to have the critical mass needed for the (National Cancer Institute Cancer Center) designation,” he said.

The other large piece is that three-story connection over Laney-Walker, beginning with the third floor and connecting the top three floors of the research building with the cancer clinic. That will be “an integrative space, where it is going to be the researchers and clinicians in one space to enhance the translational element of our research,” Khleif said.

The expansion will allow an additional 14-16 labs as well as the support services needed, he said. While the center has hired 35 additional clinicians and researchers in the last three years, it will need to add an additional 25 researchers, Khleif said.

The center’s buildup to the size and scope needed to apply for NCI designation has been deliberate, including expanding its core programs to attract more research and funding and to increase its connection with the community, he said. Funding has now reached almost $37 million, about 40 percent of the university’s total, and the clinical load has grown as well by 14 percent over three years, Khleif said.

“More importantly we started first-in-human, first-in-nation clinical trials and we are increasing those,” he said. “We’ve started now getting referrals from outside Georgia and South Carolina.”

The center has launched its Cancer Community Awareness & Access Research Education program to connect with underserved populations, has two outside clinics and has begun working with Eisenhower Army Medical Center, Khleif said.

While he is cautious about putting a timetable on when to see Georgia’s second NCI-designated center, “we are on track,” Khleif said. Winship Cancer Institute of Emory University is the only other center in Georgia and the Hollings Cancer Center at the Medical University of South Carolina is that state’s only center. There are 68 centers overall, according to the NCI.