Historic Church Being Moved Not Demolished 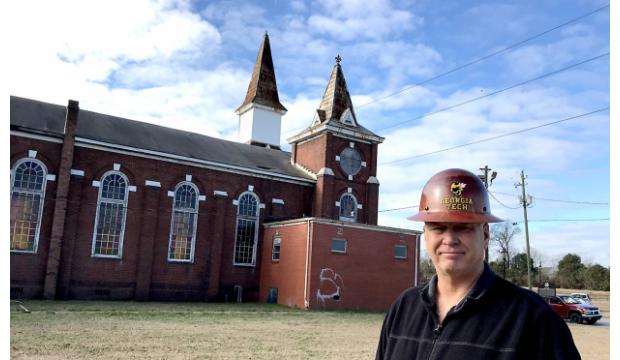 Posted at 13:18h in News by Augusta Tomorrow

A historic black Augusta church targeted for demolition has been spared the wrecking ball.

Augusta officials declined to comment due to pending agreements, but Wednesday morning a building mover was dismantling newer additions to the former Trinity CME church at Eighth and Taylor streets in preparation to move it a few hundred yards away.

“They don’t want the additions over the years – they only want the original building,” said John Landers Jr., a third-generation building mover from Ellenwood, Ga. “We’ll fabricate a type of trailer underneath the building, and underneath the trailer, we’ll put dollies and roll it across the street.”

Preparation is key to keeping the 125-year-old structure intact during the move and may take months, Landers said, estimating spring or summer before the church is moved.

“We don’t want to damage the parts we want to keep,” he said. “We’ll put a dash of silicon around the windows and cover them up with plywood to make sure they don’t fall out.”

Landers said he’s not concerned about soil contamination beneath the church – it’s deep in the compacted earth – which was the reason it was targeted for demolition.

While AGL Gas bought out all the surrounding land, including the church, 20 years ago due to contamination by a nearby gas plant, the church was left standing as a local charity attempted to convert it to a community center.

Considered the birthplace of the Christian Methodist Episcopal denomination, the church was built between 1889 and 1894 by former slaves who worshipped in other structures at the site since 1843.

Augusta Canal Authority, which governs the nearby third level of the canal, led the recent effort to “Save Mother Trinity” and developed a plan to move the church to a new site across Taylor Street so AGL can complete environmental remediation beneath the church, according to previous reports.

The authority disputed AGL’s claim that moving and renovating the church was cost-prohibitive and announced last year it had raised $475,000 to match AGL’s promise of $300,000 to relocate the structure.

Dave Barbee, chairman of the historic preservation commission, applauded the apparent success of the effort to save the church.