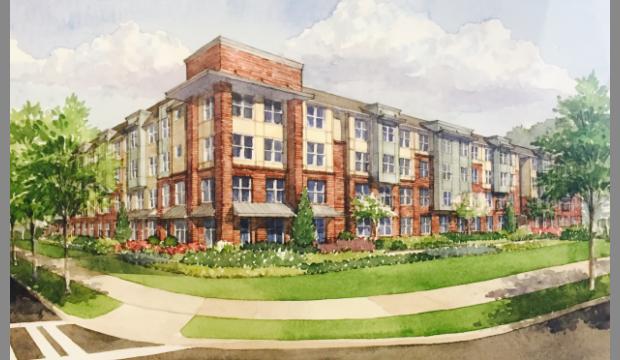 Posted at 10:32h in News, Uncategorized by Augusta Tomorrow

Augusta officials reflected on the legacy of families who for decades made their home in the city’s urban core at a Thursday groundbreaking.

The “Legacy at Walton Green” is going up at the site of Sunset Homes, the 1937-era federal housing project on 15th Street later renamed Cherry Tree Crossing. It’s a second partnership between Augusta Housing Authority and Walton Communities, which built the Legacy at Walton Oaks on Sandbar Ferry Road.

Rep. Wayne Howard, D-Augusta, grew up nearby and recalled carrying five loaves of bread from the adjacent Colonial Bread store while riding his bicycle – “You learned to ride with no hands,” he said.

His family socialized with many at the 15th Street complex – the Welchers, the Holmes – who went on to become leaders in the community, Howard said.

“There is so much in these grounds – not so much the housing and the homes we lived in, but the grounds,” he said. “This is where God placed us and we can’t forget that.”

Mayor Hardie Davis praised the partnerships that made the new development possible. City funds and planning will help make it walkable, Davis said.

“So many great Augustans have grown up here, in the inner city,” the mayor said.

Housing Authority Chairman Rodger Murchison asked for hands of those who’d been born or raised there. Several went up.

A longtime caddie at Augusta National Golf Club and Sage Valley, Hill said he’d been born at Sunset in 1950 and lived there until his late 20s.

Construction is set to begin immediately on the complex of at least 410 units. Murchison said a first 80 units will be for seniors, 55 and older, and begin leasing next year. The second 250 units will be for families, a third phase will include 80 more senior units, while 15 percent of the apartments will be public housing, he said.

“Just because we’ve made a change here, doesn’t mean that home can’t be built again,” Murchison said. “We’re proud to be part of home-making in Augusta.”

The new criteria mean former Cherry Tree residents now spread around the city and beyond may not qualify to live there. Some 355 Cherry Tree families relocated before demolition started in 2014.

The family units will be available to those earning higher incomes, between 60 and 80 percent of the area median income.

City Housing and Community Development Director Hawthorne Welcher said his father, former Laney High School principal Hawthorne Welcher, and uncles grew up in the complex. The department pushed to include the area in its Urban Redevelopment Plan to improve Walton Communities’ application for tax credits, he said.

The development means the area will soon again be teeming with people. Augusta University recently opened new dormitories just across the 15th Street bridge. Between the two, Welcher’s department is partnering with a private developer on a 221-unit mixed-use development called Foundry Place.