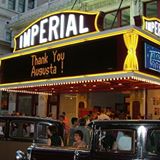 Posted at 09:03h in News by Augusta Tomorrow

The Imperial Theatre in Augusta, Georgia opened in 1918 as a vaudeville showcase. Opening night prices ranged from $0.10 to $0.35 for the best seats in the house. Charlie Chaplin appeared at the theatre on March 18, 1918 in a war bonds show. In March 1936 “The Trail of the Lonesome Pine,” starring Henry Fonda, became the first color film to be shown at the Imperial. As the downtown area declined in the 1980’s, so did the theatre which closed in 1981. In 1985, thanks to help from local performing arts groups like the Augusta Ballet and the Augusta Players, the Imperial Theatre reopened and is now listed on the National Register as important to the architectural and cultural character of the city. The experience for visitors today at the Imperial is one of sitting in a living history museum where people have enjoyed entertainment for over a 100 years. It is not a modern theater with the latest reclining seats — it doesn’t need to be. The Imperial’s beauty shines brightly for what it is — a historical treasure.