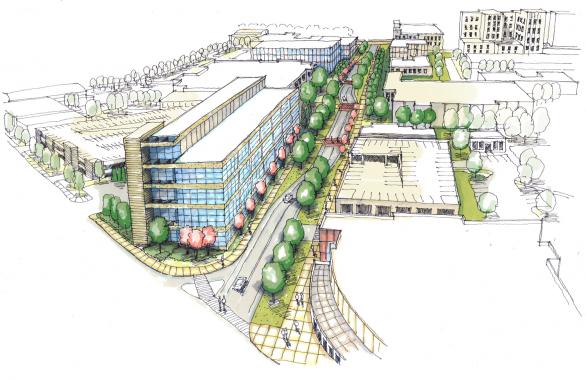 Posted at 12:40h in News, Uncategorized by Augusta Tomorrow

A long anticipated renovation to the section of Laney-Walker Boulevard that runs through Georgia Regents University could be moving closer to getting underway, although it will means months of diverting traffic away from that section, officials said.

The University System of Georgia Board of Regents is expected to vote today on approving a final budget for the project at the monthly meeting. The total project budget is $1,781,500, which would include $700,000 from a Georgia Department of Transportation grant, $200,000 from GDOT funds through the city of Augusta, and $881,500 from the university, according to the regents agenda item.

If approved, it would help move forward a project that actually began in 2008 under then-Medical College of Georgia President Daniel W. Rahn, who was concerned about the number of pedestrian hit and near-misses from faculty, staff and students crossing that street several times a day. A 2012Augusta Chronicle analysis of traffic data found eight pedestrians hit since 1995 in the two blocks of Laney-Walker between 15th Street and R.A. Dent Boulevard. About 8,500 pedestrians cross Laney-Walker in that two-block section every day.

The plan would be to narrow that section from four lanes down to two, with a “double jog” that would curve through the section, according to the DOT.

After the university applied for a grant to do the work in 2008, it wasn’t approved until 2010, Howard said. The project was then briefly supplanted by GRU President Ricardo Azziz’s idea to close that section of Laney-Walker to create a pedestrian mall and better unify the campus, a proposal that sparked a backlash from neighbors and others who felt it would harm access and would not be in keeping with the historic nature of the street.

The current plan was presented to the community as a compromise. It then took time to coordinate the university’s efforts with DOT and with the city, which has an enhancement project of its own for the 15th Street corridor, said Jennifer Smith, the assistant vice president of planning, design and construction at GRU.

“We traded drawings back and forth because we wanted to make sure that the intersections were coordinated with the other projects that were going on,” she said.

“This will look pretty seamless when both our project and the city project along 15th is done,” Howard said.

If approved, the university hopes to contact the low bidder and begin the contract work. The university had previously bid out the project in June but did not receive an appropriate bid, DOT said in a statement.

The previous proposal had chopped up the work into a number of “tiny” proposals done in phases that increased the time and cost of the project so only one bidder was interested, Smith said. Instead, the university got approval to create a detour of the area to limit traffic and “were able to get competitive bids this time,” she said.

“It allows the project to move faster and it also provides a safer environment,” Howard said. “It limits traffic into the construction zone and better directs the pedestrians in safe crossings of the street during construction.”

If work begins by summer as hoped, the detour might last the eight to nine months of construction, Smith said. But it could be opened back up at certain times, Howard said.

“There are going to be pieces of the project where there won’t be a necessity to close the road,” he said.