Miller Theater Has Reached 80% of Funding to Complete Construction 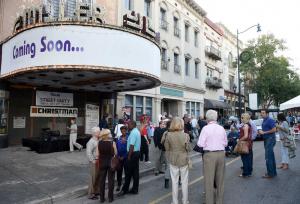 Posted at 12:18h in News, Uncategorized by Augusta Tomorrow

Just standing in front of the Miller Theater is enough to take Lee Ann Caldwell down memory lane.

An Augusta native, she spent much of her childhood going to the theater to watch feature films, and she recalls seeing a rendition of the opera Carmen on the theater’s stage. The performance had been scheduled to take place at the much larger Bell Auditorium but had to be moved at the last minute.
“It was one of the most interesting and incredible productions that I had ever seen because they had to make use of the space that was there,” she said.
On Friday, at a street party to celebrate the Miller Theater’s next step toward a renovation, Caldwell said she has renewed hope that a younger generation will be able to create memories of their own at the former downtown staple.
“It could be the beginning of an art renaissance here,” she said.
The event marked the launch of the project’s public funding phase. The Miller Project has reached 80 percent of the money it needs to complete construction, and it’s scheduled to open by fall 2017.
The Miller, which closed in 1984, sat mostly dormant until it was purchased by Peter Knox and offered to Symphony Orches­tra Augusta, which took possession of the building in 2011. Christman Co. has been contracted to complete the restoration.
Project Director Levi Hill IV said Friday’s event sends a strong signal for the revitalization of downtown. Roughly 200 people attended the street party in the 700 block of Broad Street, many of whom used the opportunity to contribute to the project by purchasing Miller Theater merchandise or taking part in the “Take A Seat” campaign, which allows sponsors to have their name on a seat in the newly renovated theater.
“It tells me that Augu­stans are very interested in their city,” Hill said of the turnout. “There are many things that go into creating a city culture, and arts definitely go into that. We hope that our arts project here is going to have a great impact on downtown Augusta.”
Hill said the theater will serve primarily as Symphony Orchestra Augusta’s first permanent home. But with an expected 15 symphony performances a year, the theater will be used for other purposes to complement the Imperial Theatre.
Imperial Theatre Execu­tive Director Charles Sca­vullo, who had a booth at the street party, likened the situation to something he saw in Miracle on 34th Street. In the film, when Santa Claus knew that shoppers couldn’t find what they were looking for at Macy’s, he would direct them to another store.
At 1,300 seats, the Miller would be able to accommodate a larger performance than the Imperial, which has 850 seats, Scavullo said, perhaps giving patrons a performance they wouldn’t be able to experience elsewhere. Both theaters are trumped in size by the 2,500-seat Bell Auditorium.
“It’s a natural progression, and I think it serves the community, downtown and the theater district perfectly by having a variety of different things going on – on both sides of the street,” he said. “We would like to see this part of the neighborhood rise economically, just like the art district did a few blocks up.”