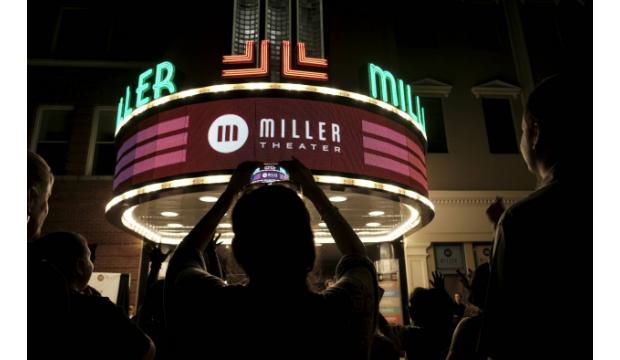 Posted at 13:04h in News by Augusta Tomorrow

Three decades after being boarded up, one decade after being rescued from irreparable decay and 18 months after meticulous restoration and reconstruction, the Miller Theater is once again ready to raise its curtains to the public.

And it will do so in grand style Saturday at a sold-out gala featuring singer-actress Sutton Foster and the Symphony Orchestra Augusta. An open house on Sunday from 2-4 p.m. will give the general public a glimpse at the most ambitious historic restoration project in recent Augusta history.

“It’s a jewel that’s been hidden for the last 35 years,” said Levi Hill, chairman of the committee that oversaw the seven-year, $23 million initiative to make the 1,300-seat theater the city’s newest performing arts venue and the symphony’s permanent home.

Today, the opulent theater has a higher purpose – being the linchpin to what some are calling the city’s arts and culture district.

“It really is the capstone on a serious cultural corridor,” said Kevin Grogan, executive director for the Morris Museum of Art.

The art museum’s board of directors last month approved a plan to relocate the museum from its present riverfront site to 711 Broad St., a former bank building directly across the street from the Miller.

Broad Street’s east end already boasts such cultural amenities as the historic Imperial Theatre at 749 Broad St., Le Chat Noir at 304 Eighth St., the James Brown Arena-Bell Auditorium complex at the corner of Seventh and Telfair streets and the Augusta Museum of History at 560 Reynolds St.

The neo-classical former bank building would give the museum much more space and visibility. Though fundraising and renovation work likely wouldn’t be completed until 2021 at the earliest, Grogan said the future interplay among the cultural amenities would be palpable.

Brenda Durant, executive director of the Greater Augusta Arts Council, agreed the coalescence of cultural amenities will once again make lower Broad “an arts destination.” In addition to the Miller and Imperial, lower Broad also was home to the since-demolished Rialto Theater at 767 Broad St. and The Modjeska at 813 Broad St., a building no longer used as a theater.

She said the Miller’s size – larger than the Imperial but smaller than the Bell – will help Augusta attract and accommodate a wider variety of performers.

“What the Miller is doing is upping the ante for Augusta to get a larger share of the pie,” she said. “If you look at the calendar, the Miller already has 17 events, so already it’s starting off with a bang.”

The theater is managed by SMG, a Pennsylvania-based company whose portfolio ranges from the 76,000-seat Mercedes-Benz Superdome in New Orleans to Jacksonville, Fla.’s 400-seat Ritz Theatre. SMG will be responsible for booking anywhere from 75 to 100 shows around the symphony’s 14 performances.

The nearby James Brown Arena-Bell Auditorium complex is managed by Spectra, a division of communications giant Comcast.

“What you have is the two most powerful venue management firms in America working in Augusta,” Miller Theater General Manager Marty Elliott said. “That competition is healthy – it’s not bad competition. I think we all understand collectively we need to work together to make this work for the promoters.”

The Miller was one of five theaters operated by the late Frank J. Miller and his partners. The businessman spared no expense building it during the late 1930s at a cost of nearly $8.9 million in today’s dollars. The 39-ton steel beam that supports the free-floating balcony, for example, is said to have been the largest beam transported in Georgia at the time, and the original carpet was reportedly one of the largest continuous pieces ever produced.

Its mostly concrete and steel construction is why most damage during its decay in the 1980s and 1990s was only cosmetic.

The exterior features decoratively lit glass block – a novel building material at the time – and a massive marquee whose sweeping lines typified the Art Moderne style, which was in vogue as Art Deco architecture fell out of fashion.

The marquee’s lights, now digital, were re-electrified for the first time in 30 years during September’s Arts in the Heart of Augusta festival.

“The lighting of the marquee was tremendous,” said Barry White, president of the Augusta Convention & Visitors Bureau, whose downtown master plan proposes marketing lower Broad as the city’s entertainment district. “People want to be around other people, and when you see that sign lit up at that corner of Broad Street, it shows activity that people want to be around.”

As a movie house, the Miller reached its apex during Hollywood’s golden age. But development of suburban multiplexes led to the theater’s downfall, and by the early 1980s it was making ends meet as a local performing arts venue before closing for good in 1984.

Its rebirth began in 2005 when it was purchased and preserved by local philanthropist Peter Knox IV, whose father was credited with saving the Sacred Heart Catholic Church from demolition a generation earlier.

Knox offered the symphony the Miller in 2008. Though desperate for a home, the organization was unsure the nearly 80-year-old property fit the bill.

But it decided to move forward with a capital campaign once it determined it could renovate the structure and acquire the adjoining building – the former Cullum’s department store at 710 Broad St. – from the family of Alonzo “Bruz” Boardman.

Combined, the two buildings total 60,000 square feet – a size belied by the Miller’s grandiose but narrow facade. The Cullum’s building will house offices for the symphony and the Knox Music Institute as well as add nine feet to the Miller’s proscenium stage and provide much-needed space for restrooms and performer dressing rooms.

Much of what patrons will see inside is original. Most of the interior has “just been repaired, reanimated and polished,” Hill said. The theater’s mirrors are all original, as is the hardware on roughly half of the 1,300 reupholstered seats.

With the exception of state and federal historic tax credits and $5.1 million from a special purpose local option sales tax package, the rest of the $23 million project was funded by contributions from individuals, corporations and foundations.

“It maybe seemed like kind of a long shot for it to happen. In some ways, it was,” Hill said. “But it also was as if providence was guiding the project.”