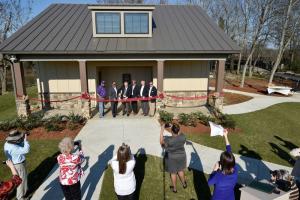 Posted at 10:19h in News, Uncategorized by Augusta Tomorrow

Standing at the trailhead to the Augusta Canal National Heritage Area, Rebecca Rogers gazed toward a red ribbon tied around four stone columns.

“Do you remember how this area used to look?” the canal marketing director said. “Wow, it’s come a long way.”
Canal officials held a ribbon-cutting Monday for the new entrance to the Lake Olmstead trailhead, featuring a building with restrooms, sign guides to trails, paved walkways, and filtered-water fountains for humans and animals. About 30 people attended the ceremony, including Augusta Mayor Hardie Davis.
The project began in August and was made possible through funding from the federal, state and local government.
“It may sound cliché, but it really is great when a plan comes together,” said Dayton Sherrouse, the canal executive director. “It took a lot of effort, but there’s no question the end result was worth every challenge. Overall, I feel like this has become the perfect entrance to the Augusta Canal system.”
A major obstacle came early in the construction process when builders realized the site of the restrooms was on an old city dump.
“They started digging but there was no foundation,” Sherrouse said. “There was tons of garbage still in the ground. … In the end, we had to dig about 20 feet before even getting started.”
The total cost of the project was $475,000, which was aided by a $100,000 grant from the Georgia De­partment of Natural Resources. Russell Foster, the project manager for the canal, praised the department for its contribution.
“Moments like this ribbon-cutting are truly icing on the cake,” Foster said. “Seventy percent of my job is planning, 20 percent is construction and 10 percent is getting to celebrate days like these. Man, this is special.”
The canal was built in 1845 – spearheaded by Augusta resident Henry H. Cumming – as a source of power, water and transportation.
“If Mr. Cumming was here today, I think he’d be very proud of what we’ve done,” Foster said. “This new trailhead is a tremendous addition for the Augusta community.”