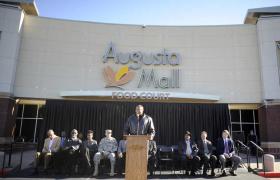 Posted at 10:26h in News, Uncategorized by Augusta Tomorrow

Leaders hope the new route, which is being offered as a six-month pilot program to test ridership, will provide military personnel another way to catch a ride to the city as well as open the military installation’s job opportunities to city residents.

“Weekends will be popular. People are off work and they want to get off (post). This gives them another mode to do that,” said Sharon Dottery, contract manager for Augusta Public Transit.

Route 10 runs Monday to Saturday, beginning early in the morning at the Wal-Mart on Wrightsboro Road and then launching mid-morning from Augusta Mall near the food court entrance. The bus stops at Fort Gordon’s Dwight D. Eisenhower Army Medical Center and bus depot, as well as multiple stops along Barnes and Brainard avenues on post.

The bus enters Fort Gordon at Gate 1 at Jimmie Dyess Parkway where riders must have a Department of Defense identification card to stay on the bus. Riders with a driver’s license must get a pass at the visitor’s center at the gate and wait for the next bus to arrive at Fort Gordon.

A 20-seat bus is running the route during the pilot period, Dottery said. The bus system’s electronic monitoring system will count riders and revenue, and paper surveys will be used to collect feedback, she said.

Bus service to Fort Gordon has been discussed for years, with the latest initiative becoming reality after collaboration between several commission members and leaders at the installation.

Anderson said the transit service will enhance interaction between the post and city, while also helping alleviate traffic congestion that’s expected because of growing missions including relocation of the Army Cyber Command headquarters to Fort Gordon.

“I have met people who would like to be working out at Fort Gordon. There are jobs from entry-level to professional out there,” she said.

Commission member Bill Lockett said he’s confident the route will be used by many riders, and the city must find a way to fund the service after the pilot program concludes.

“We’ll come up with the money like we do anything else,” he said.