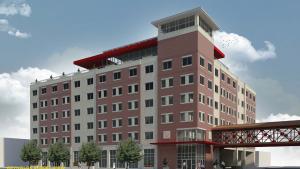 Posted at 11:29h in News, Uncategorized by Augusta Tomorrow

“I said a long time ago, we’re changing downtown Augusta,” said Paul Simon, president of Augusta Riverfront. “This will be the center of town, right here at Ninth and 10th and Reynolds streets.”

The new 125- to 130-room hotel at Reynolds and Ninth, which is now known as James Brown Boulevard, will be at the site of the former city jail being demolished. It will connect across James Brown to the convention center parking deck via a pedestrian bridge.

Commissioners on Tuesday unanimously approved constructing at city expense a second pedestrian bridge over Reynolds Street, connecting the parking deck to the convention center plus the lease of 100 second-floor spaces for hotel guests.

Under the agreement, the hotel will pay Augusta the monthly rate of $65 for each space, or $78,000 per year, for at least four years, and the city will pay for construction of the Reynolds Street pedestrian bridge, up to $1.15 million.

Simon, who worked closely with City Administrator Janice Allen Jackson on the project, said the commission has become more friendly since seeing the convention center’s successes and growth downtown.

“They understand that the project has been a success and we are bringing in conventions, and the beneficiary is the city,” including an economic impact this year of more than $16 million, Simon said.

Jackson said a new hotel will boost the convention center and deck, which she called “two of Augusta’s most significant public investments.”

“The parking deck in particular, has been underutilized, and this project presents an opportunity to add to our parking revenues and bring another attractive asset to downtown,” she said. “This also further allows Augusta to capitalize and expand upon the success of our tourism efforts.”

“From a partnership perspective, the city saw it was extremely important for us to be a partner,” Davis said. “When you look at the number of events we’re hosting at the (convention) center, additional beds is a good thing for the city of Augusta.”

Commissioner Bill Fennoy, who represents the area, called the agreement “a good deal” beneficial to the government. “We get something out of it,” he said.