“The Atticus” Upscale Apartments to be Built Downtown 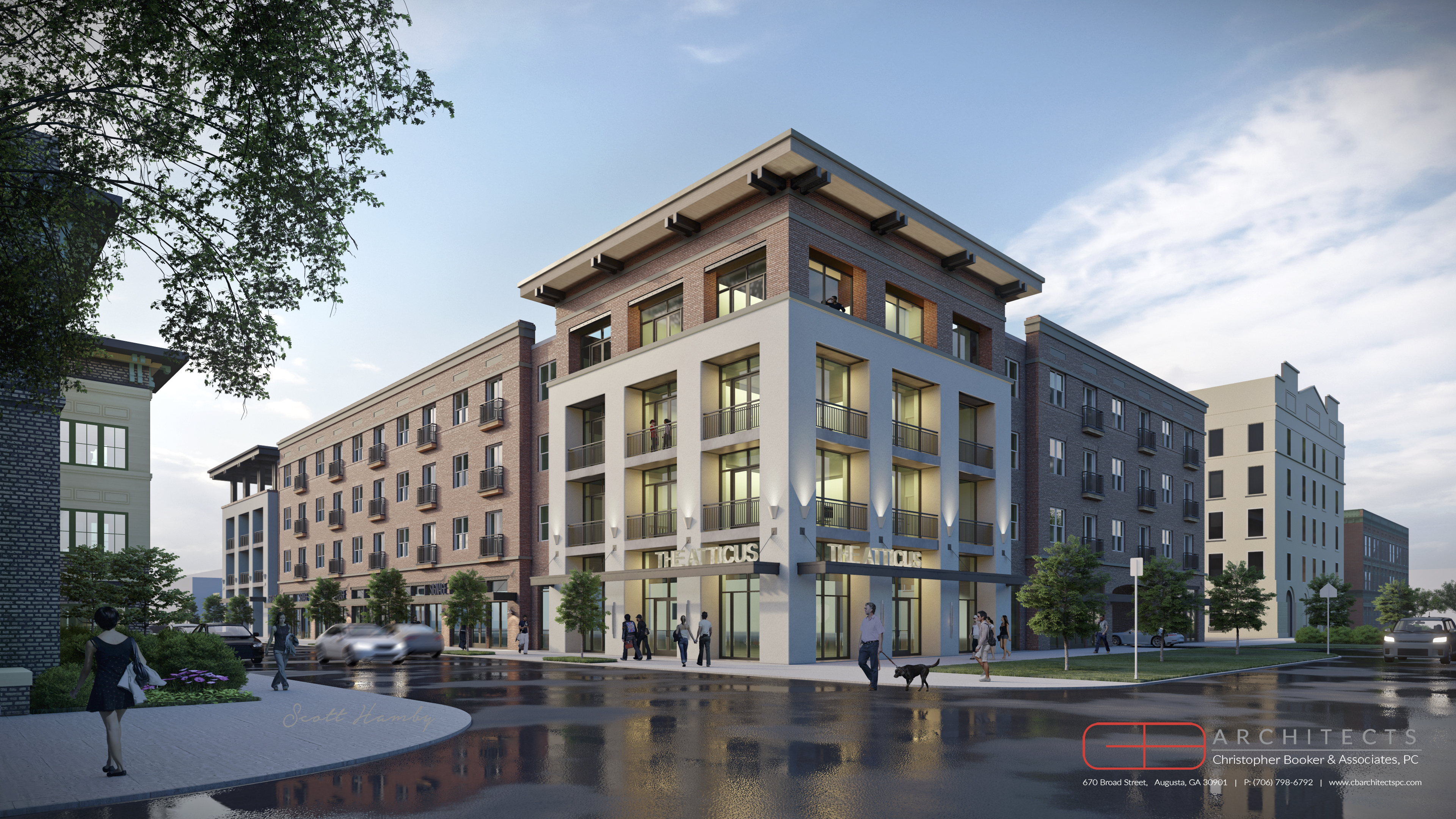 18 Jan 2020 “The Atticus” Upscale Apartments to be Built Downtown

Posted at 13:57h in News by Augusta Tomorrow

Upscale apartments planned for downtown are part of multi-family boom.

The southeast corner of 10th and Ellis was the epicenter of Jack Connell’s business empire.

It’s where the legislator held court with everyone from judges to janitors at the Sandwich City diner. It’s where his Merchants Credit Bureau agency still operates.

But by the middle of next year, the corner will be a four-story apartment building that bears his name.

“This wouldn’t be happening if it weren’t for him,” Gibbs said. “He taught me everything I know.”

The multimillion-dollar development in the heart of downtown – potentially the central business district’s first all-new multifamily construction project in decades – is set to break ground in late spring and open in mid-2021.

It will boast a covered and gated 57-space parking lot, ground floor retail/restaurant space, a rooftop patio and high-tech features such as keyless entry – the types of amenities that appeal to urban-minded young professionals migrating to the downtown area.

“With all the things that are happening downtown, I thought this would be a really good idea,” Gibbs said, referring to tech-based developments such as Unisys, TaxSlayer and the Georgia Cyber Center. “I think the timing is right.”

According to multifamily real estate analysts, the timing is right.

Augusta’s growing economy and the rise of the millennial workforce is creating demand for rentals – particularly amenity-rich apartment communities. Apartment rents in Augusta increased 3.3% last year, a rate that is double the national average and is the 12th-highest gain for a mid-size American city, according to San Francisco-based rental analysis firm Apartment List.

The firm’s housing economist, Chris Salviati, said the numbers do not suggest the market’s “growth is out of control,” but it is a clear indicator of strong apartment demand.

“At the highest level, it’s really a simple supply-and-demand thing – how many people are looking for housing and how much is available?” he said. “Ultimately, rent growth can be sort of a positive signal in the sense that rents only grow when people want to live in a city.”

“The Augusta market is on fire,” John VanMeeter, the vice president of development for The Sterling Group, told The Augusta Chronicle in November when announcing his company’s 296-unit Rivershoals Apartments development at the Village at Riverwatch. The west Augusta apartment community, a $52 million investment, is expected to open in August 2021.

The metro Augusta area has historically been a low-cost housing market, and Augusta’s uptick in apartment rents is a fairly recent phenomenon.

For a two-bedroom apartment in Augusta, Apartment List reports the median rent – the midpoint between most and least expensive – is $799. With the vast majority of Augusta’s new high-end, amenity-filled apartments starting at $950 for a one-bedroom and more than $1,100 for a two-bedroom, it is likely upscale developments have helped drive up average rent gains in metro Augusta, Salviati said.

Like most upscale communities, the property has granite countertops, stainless steel appliances, engineered-wood grain flooring and 10-foot ceilings. Southeastern sold the complex last summer to a California company for $58 million.

“What used to be considered an ‘A’ product in Augusta in 2016 is now an ‘A-minus,’” Bird said. “Traditionally the rent-per-square foot on the top end was $1.25, which is what Crane Creek was. Now you’re seeing the $1.35- to $1.40-square-foot range, which is what a lot of people need to see to justify construction.”

Although not every recent and proposed apartment development in metro Augusta is a luxury community, demand for rentals is driving a noticeable increase in multifamily construction activity based on an informal survey of the market:

• Evans-based Ivey Development in December acquired a 4.2-acre parcel at 636 11th St. – a site between the central business and medical districts – to build an upscale 155-unit apartment community called Millhouse Station. It is set to open in summer 2021.

• An Alabama developer negotiating a public-private partnership with the city of Augusta has plans to build a mixed-use development called Riverfront at the Depot that includes 143 upscale apartment units.

• An Indiana-based developer is building a 296-unit multifamily complex on River Shoals Parkway, between the recently opened Residence at Riverwatch – a similar upscale apartment community – and the future site of the Topgolf entertainment venue. It is expected to open in summer 2021.

• Rex Property & Land has acquired 922 Greene St. – the former YWCA Building – and has plans to redevelop the 6,500-square-foot building into 20 apartment units.

The city-backed Beacon Station development opened in fall 2019 at the corner of Wrightsboro Road and R.A. Dent Boulevard with 221 market-rate units.

• Earlier this month, city planning officials approved a rezoning request for Augusta Cyberworks 2 LLC that would allow owners of King Mill to redevelop the historic property into a mixed-use development with 244 upscale apartments.

• In spring 2019, Atlanta-based Greenstone Properties opened The Clubhouse, a 32-unit, high-end residential mid-rise next to the outfield of the SRP Park baseball stadium in the Riverside Village development, which also is home to the upscale Ironwood complex, a 280-unit upscale complex opened in late 2018 by Birmingham, Ala.-based LIV Development.

Amanda Dyches, a local manger with Pegasus Residential, the company that manages The Clubhouse and Beacon Station developments, said young professionals are a high percentage of tenants. However, a surprising number are temporary-contract workers and longtime locals who need a place to stay for six months while their new homes are being built, she said.

“They’ve put their homes up for sale and are building their ‘forever’ home, so they need something in between,” she said.

An increasing number appear to be empty-nesters and seniors looking to downsize from large homes they no longer need.

“It’s people just moving from one phase of their life to the next,” she said.

Gibbs said she believes a portion of the tenants at The Atticus will be older adults, but she expects the majority to be younger people looking for an urban “live, work, play” lifestyle.

“I think this is going to be a one-of-a-kind in Augusta,” she said. “It will have more of an urban feel.”

The last all-new multifamily construction in the central business district was the Port Royal condominium complex along the riverfront at Seventh Street in the early 1990s. Canalside, which opened in 2015 along Walton Way, is considered part of the medical district. Ivey’s Millhouse Station along 11th Street near the Augusta Judicial Center would straddle the two districts.

Gibbs is working with the Augusta-based Christopher Booker & Associates architecture firm to develop a mostly traditional brick-and-stone design with a few contemporary accents to give the building a timeless look that also complements surrounding architecture. With parking hidden at the rear of the building, the Atticus will have no setback from the sidewalk, much like the century-old Cobb House apartments directly across 10th Street.

“To me, my Dad was from that generation – the Sinatra generation – and I think with the name Atticus and the blend of classic and contemporary styles will let it look pleasing, while still being traditional in a way,” Gibbs said.

She said her desire for a first-class development stems from her father’s love of downtown.

Connell, who served 34 years in the Georgia House of Representatives – 26 as speaker pro tempore – was born downtown in 1919 at the old Margaret Wright Hospital, which was on Greene Street just three blocks west of the eponymous apartment development. Connell died in 2013 at age 93.

Some of the businesses he started in Augusta shortly after returning home from World War II are now run by Gibbs. One of his most visible, but least profitable, ventures – Sandwich City – closed in 2018 after 45 years in operation. The space is empty again, with the expiration of Riverside Smoke Bar-B-Que’s 12-month lease in December.

Gibbs said the commercial strip that housed the diner and barbecue restaurant will be demolished along with the Merchants Credit Bureau building. She said that business is negotiating to lease office space in west Augusta.

She received approval to demolish the buildings last month from the Augusta Historic Preservation Commission, which determined the 1950s-era buildings were not historically or architecturally significant.

The new building will offer a yet-to-be-determined amount of ground-floor commercial space, which Gibbs said she hopes attracts restaurants, cafes or possibly even a small market.

The Atticus will be marketed under the tagline “The Smart Move,” which Gibbs said reflects the the development’s blend of high-tech features and amenities with a purely urban.