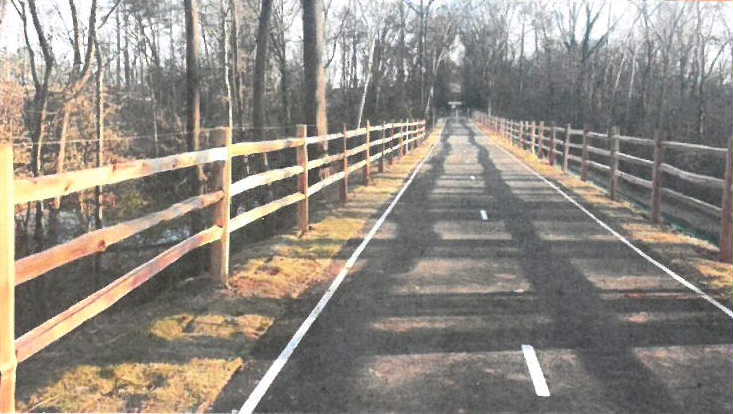 Posted at 07:25h in News, Uncategorized by Augusta Tomorrow

One of North Augusta’s biggest attractions — the Greeneway — fully reopened on Friday, February 6, 2015.

The 9-plus-mile, paved recreational trail that follows an abandoned railroad right-of-way was damaged in last February’s ice storm, when a culvert under the trail collapsed. The section, from Cypress Drive to the Activities Center, has now been completely repaired.

“It’s almost a month ahead of where we thought we would be,” said Rick Meyer, director of North Augusta Parks, Recreation and Leisure Services. “I tip my hat to City engineer Tom Zeazer, Tom Dunaway with Toole Engineering and Beam’s Contractors. They got after it and the weather cooperated. I never imagined we would be open on Feb. 6, that’s what I call crazy good.”

In previous interviews, Meyer said he expected the Greeneway to be open by the first of March at the earliest, but credited the contractor for putting in extra work to finish early.

“I think Mother Nature cooperating had a lot to do with it, but the contractor was great — they didn’t play,” Meyer said. “They had the knowledge and the equipment to do the job. They were willing to work as long as we would let them work, including some Saturdays. They got done faster because of that and it looks great.”

The repairs were completed earlier in the week, but Mayor Lark Jones asked for a protective fence to be placed along the trail at the repair site, where all the trees have been removed.

“The actual slope of the Geeneway is less severe now than it was before — they improved it,” Meyer said. “The difference is perception, because now you have no trees (there) and it’s wide open. I had no issue walking that section of the Greeneway, but we looked at it and decided to put up a split-rail fence that sort of matches the trail and serves the purpose of protecting the users.”

The next step for the City is looking at the other culverts and trying to make repairs before another collapses.

“Tom Zeazer and Tom Dunaway are looking at the next culvert up, we have sent a camera through that culvert to assess and evaluate the damage,” Meyer said. “They’re now looking at ways to address that culvert and how they can take care of it. We think that culvert can be rehabilitated, it isn’t under the same amount of stress that the culvert we just replaced was. We’re trying to be proactive and go one at a time.”

Meyer said the process of repairing the Greeneway — and the calls about when it would be finished — showed him how important the trail is for North Augusta.

“We want to thank the people of this community and the people that use the Greeneway,” he said. “Most everybody was completely cooperative and patient with us and we appreciate that. Their reward is for the Greeneway to be open a month sooner than expected and the great weather we’re going to have this weekend.”